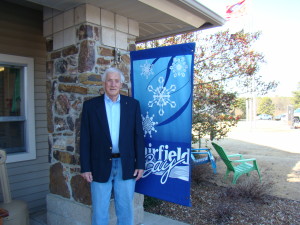 Chuck Willard is currently the Justice of the Peace for District 04 (Van Buren County) representing our city, Fairfield Bay, and is seeking re-election for another term as an Independent. He is Committee Chairman for the Economic Development Team, as well as serving on the building and grounds committee.
Chuck and his wife, Sue, have been married 34 years, have 5 grown children, 8 grandkids and 1 great-grandson. They have lived in the Bay 10 years and are members of the Fairfield Bay Baptist Church, where Chuck is an active Deacon, chairman of the finance committee, chairman of Men’s Ministry and has served on most other committees within the Church.
His background has been in manufacturing management and human resources. He worked for only two companies in his career; Federal Mogul Corp. in Kansas City, Missouri for 23 years and Thorco Industries in Lamar, Missouri, a division of Marmon Corp. , Chicago, Illinois for 23 years.
Chuck served his country in the U.S, Army after graduation, then furthered his education while working, taking numerous management courses with Kansas University in Kansas City, Kansas.
Willard said that he feels it a privilege to serve the citizens of Fairfield Bay and Van Buren County and looks forward to the opportunity to continue. He will continue to seek out and promote growth and development in business and tourism. He stated, “I appreciate the citizens for their support and understanding during my first two years as your Justice of the Peace and look forward to serving the residents in the future.”