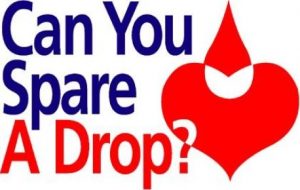 You hold the power to save a life! How? By giving blood on Tuesday, October 10, 2017 from 11 a.m. to 4 p.m. at the St. Francis Catholic Church Fellowship Hall in Fairfield Bay. Your blood is always needed, but it’s never been needed more than the present time with Harvey still showing his strength in the Houston area, Irma threatening more lives Florida and other states in the southeast and Jose and Katia still active in the Gulf.
If you want to give, but you’re not sure that your blood is well-balanced for giving, take this simple precaution: Eat foods high in iron for a few days or even a week before you give blood. The best source of iron is animal-based foods, especially red meat and offal (such as liver). Chicken, duck, pork, turkey, and fish also have iron.
Iron is also found in many plant-based foods such as:
•green vegetables, for example spinach, silverbeet and broccoli
•lentils and beans
•nuts and seeds
•grains, for example whole wheat, brown rice and fortified breakfast cereals
•dried fruit.
The iron in animal-based foods is easier to absorb than the iron in plant-based foods.
Even though you are increasing iron in your system, consider that certain foods and medications can decrease the absorption of iron into your system, so give up chocolate, coffee, tea, and high-fiber foods temporarily.
Thank you for donating!