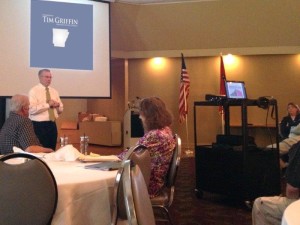 We, at Rotary, were privileged to get Congressman Tim Griffin to speak at Rotary in May 2013. Congressman Griffin gave us a clear and animated picture of some economic problems and possible steps to cure the difficulties.

Griffin is a graduate of Hendrix College in Conway and Tulane Law School in New Orleans. He attended graduate school at Oxford University. He has served in the U.S. Army Reserve for 17 years, was deployed to Iraq and holds the rank of Lieutenant Colonel. He also served as U.S. Attorney for the Eastern District of Arkansas and Special Assistant to the President and Deputy Director of Political Affairs for President George W. Bush. Griffin lives in Little Rock with his wife Elizabeth and their two children.

Congressman Tim Griffin (AR-02) spoke to a full room at the Fairfield Bay Rotary luncheon on Wednesday. His remarks were part of a presentation designed to help explain the federal budget and why it matters to Arkansans.

The slide shows a series of pie charts that represent federal spending over time. The yellow part in the shape of the popular video game character consists of “autopilot spending” – the amount of money that is spent automatically each year on things like Social Security, Medicare, Medicaid and the interest on the debt. The remaining section, that appearing to be in Pac-Man’s mouth, represents “discretionary spending,” through which most federal programs are funded. This includes funding for education, defense, agriculture, labor, medical research, transportation and veterans.