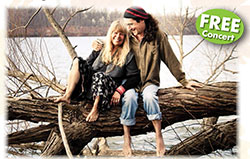 Friends of the Bay, “Still on the Hill,” will return to our community to help celebrate the annual Bloomin’ in the Bay event on May 9, 2015. They will stroll through beautiful Ed Leamon Park bringing joyful strains of folk, bluegrass and acoustic music to the ears of those who are visiting the Plant Sale and vendors’ booths.
Later in the evening, “Still on the Hill” will present a concert which is sure to bring smiles to the faces and rhythmical nods to the heads of all who attend. Currently from Fayetteville, AR, this most interesting pair of musicians tour the United States, Canada and Europe sharing their original musical ditties which highlight, feature and celebrate life in the Ozarks.
Kelly Mulhollan grew up in the Fayetteville, AR area and as a boy played regularly at the family’s cabin in Larue. Therefore, he is very familiar with the formation of Beaver Lake. He actually remembers when the dam was built, the river flooded and formed Beaver Lake. Therefore, since he harbors mixed feelings about the dam and flooding event, he did not immediately jump at the opportunity to write songs about the area when he was approached last year. After giving the matter some long and hard thought, he and Donna agreed.
Donna Stjerna (Mrs. Mulhollan) grew up in New York City, and had a young life playing fiddle with her dad as they toured the US. At the age of 19, she joined a country-western group and toured the Reno-Vegas circuit for many years. She played Top 40 tunes with her group, and was not aware of how well “original music” was enjoyed by audiences until she met Kelly Mulholland in a recording studio in 1994.
Kelly was all about writing music, and Kelly was all about showmanship…a match made in heaven…as the saying goes. Donna is now an accomplished song writer, as well as an accomplished instrumentalist. The Mulhollans together not only vocalize and song write, but Kelly plays acoustic guitar, banjo, mandolin, harmonica and tenor ukulele, while Donna plays fiddle, cello, mandolin, washboard, and mbira. Very often they bring instruments which they have made themselves to their concerts.
Please join us for a most interesting concert at 7 p.m., FFB Conference Center, 110 Lost Creek Parkway. “Still on the Hill” will perform music which highlights the White River and Beaver Lake saga. The event is sponsored by the North Central Arkansas Foundation for the Arts and Education as well as by the Arkansas Arts Council, and is a no charge event. However, donations are encouraged and will be cheerfully accepted at the Conference Center.