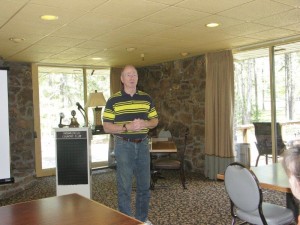 On Wednesday, April 24 we had a very special talk by George Perceval. It was a moving experience. George had lived on Mystic Isle for the last 8 years.

George served for 4 years active duty during the Vietnam War. He retired from Remington Arms and Ammunition Co. after 20 years of service, working in a variety of management positions.

George returned to his home state here in Ark with his wife, Dianne. George joined the US Army Corps of Engineers in 2004 and was a Park Ranger here on Greer’s Ferry Lake.

George’s talk centered on his experience in Vietnam. You may all remember the fierce and almost desperate battle our Marines fought in Khe Sanh from Jan 20 to April 1 in 1968. Here is what the United States President presented as a Unit Citation to the 26th Marines.

These are the words of the Citation: Throughout that period, the 26th Marines was assigned the mission of holding the vital Khe Sanh Combat Base and positions on Hills 881,861-a, 558 and 950, which dominated strategic enemy approach routes into Northern I corps. The 26th Marines was opposed by numerically superior forces-two North Vietnamese Army divisions, strongly reinforced with artillery, tank, anti-aircraft artillery and rocket units The enemy, deployed to take advantage of short lines of communications, rugged mountainous terrain, jungle and adverse weather conditions, was determined to destroy the Khe Sanh Combat Base in conjunction with large scale offensive operations in the two northern provinces of the Republic of Vietnam. Despite overwhelming odds, the 26th Marines remained resolute and determined and inflicted heavy losses on the enemy. When monsoon weather greatly reduced air support and compounded the problems of aerial resupply, the men of the 26th Marines stood defiantly firm. Through their indomitable will and resolute courage the 26 the Marines and supporting units held the Khe Sanh Combat Base. The actions of the 26th Marines contributed substantially to the failure of the Viet Cong and North Vietnamese Army winter/spring offensive.

After quoting this Citation, George continued to talk about the incessant fire, the repulsed ground attacks, the lack of proper resupply in food and weapons due to monsoon rains. The expectation of death at any time took the utmost willpower and courage to stand up to the enormous pressure. It was a touching tale and some of us, I for one, had to control my eyes from bursting out into tears; George himself had to pause a number of times, while overcome with the intensity of his memories.

Here I want to add a few of my own thoughts. At the end of the Vietnam War, our soldiers returned home and were greeted with hostility. Our soldiers were shabbily treated. I was furious to witness the behavior of so many Americans. Since I had just obtained my US citizenship, I felt rather strongly about how our American homecoming soldiers were treated. I knew the Nazis and the Communists. We had to act to preserve our freedom.