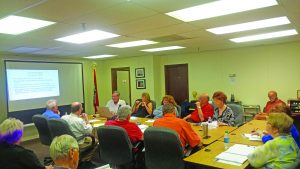 The Fairfield Bay City Council held their regular meeting on Monday, October 9 in the City office conference room. The minutes and financials were approved as presented.
The department heads presented their monthly reports.
Council members approved Resolution 2018-13 to advise the quorum courts of Van Buren and Cleburne Counties of a 5 Mills ad valorem tax on real and personal property for the residence of Fairfield Bay for the fiscal year 2018.
Council members also approved Ordinance 2017-08 to ad a voluntary contribution to county property tax bills for the residents of Fairfield Bay to support the Fairfield Bay Animal Shelter. The voluntary contribution will be $10 and all monies collected shall be put into a separate account with the City of Fairfield Bay for additional support for the Fairfield Bay Animal Shelter.
Mayor Wellenberger, read a letter of resignation from Councilman, Mike Shamoon. Shamoon resigned do to a conflict with his job which would prevent him from attending further council meetings.
In other city news:
• The commercial appraisal for the hotel has yet to be completed and is needed before the closing can take place.
• DPS will hold their Annual Open House on Saturday, October 21.
• The EMS will hold an active shooter exercise at IRV on Monday, October 30. This is a joint exercise with; EMS, Police, Fire, Dispatch, OEM, and Southern Ambulance.
• Spokesperson, Lynn Cockeran, addressed the City Council about starting a neighborhood watch program in the trailer park. She was very appreciative of all the work that has been done by the City and the Club to cleanup the trailer park. The watch would be a great way to help deter the current drug problem in the area.
•Gregory Alexander addressed the council about getting signs put up on the UTV/ATV trails, to ensure that riders stop or at least yield before crossing roads used for everyday traffic.