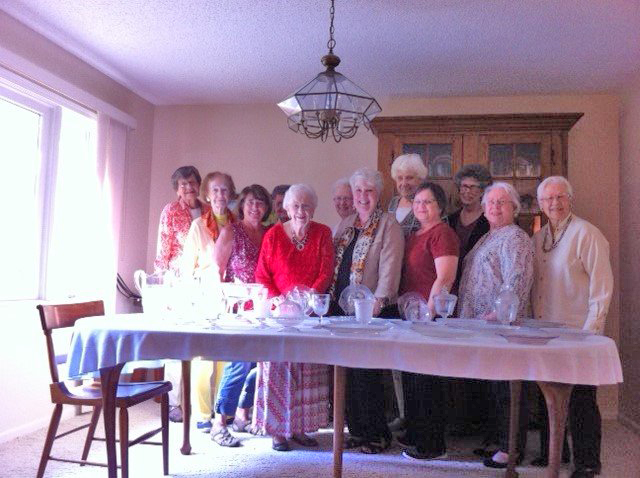 Ruth Rasmussen gave the October 24 Questers program in the home of Al Marron, whose wife, Shirley, was a member of the Indian Rock Chapter. The subject of the program was Iowa City Glass, which is a molded clear flint glass with etched pictures and borders in many, many different designs. The crane pattern seemed to be the favorite etching with the oval and bar border the most popular among members. The collectable glass was made in Iowa City, Iowa for a short period of time – until it was determined that the sand along the Missouri and Mississippi Rivers was not suitable for the glass making. Consequently, sand from dunes in Indiana had to be used. Members enjoyed a chocolate frosted, chocolate cherry cake along with nuts and fall candy, coffee and orange spiced tea with orange wedges, served by Ruth Rasmussen and Willa Wells. Chapter members signed a get-well card, sending wishes to Ingeborg Baur who is in rehab in Heber Springs. A long but lively and enthusiastic business meeting covered discussions from labeling trees on the trail near the Indian Rock Cave to taking a day trip to Hardy, Arkansas to a Christmas Potluck and a gift ornament exchange at the December meeting to considering Kathy Williamson’s donation offer of an antique bed-warmer for the 2017 State Convention Silent Auction to looking forward to 2018 when Fairfield Bay will host the State Questers Convention. The next meeting will be on Monday, November 14 at the home of Dolores Hietbrink…an early date to accommodate those who travel for Thanksgiving.