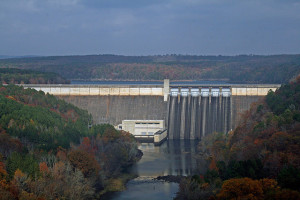 Oct. 3, 2013, marks the 50th anniversary of President John F. Kennedy’s historic dedication of Greers Ferry Dam. A celebration will begin at 11:30 a.m. at the JFK Overlook located just north of the dam. President Bill Clinton will make remarks from the same podium used 50 years ago by President Kennedy during the dedication ceremony, and other special guests will include Brigadier General Thomas Kula, and Governor Mike Beebe.

The dedication of Greers Ferry Dam on Oct. 3, 1963, proved to be significant as it was one of President Kennedy’s last dedications and one of his last public appearances before his assassination on Nov. 22, 1963. The anniversary ceremony will include many educational displays on the construction and purpose of the dam, as well as music by the 106th Army Band.

The event is free and open to the public. Park gates open at 9:30 a.m. Visitors are encouraged to bring lawn chairs due to the limited number of seats available. Southwestern Energy will be providing water to the crowd. “I know that 10 years from now, if we come back again, flying as we did over the land that we will see an even richer State, and I think you can take pride and satisfaction in what you have done”. President John F. Kennedy