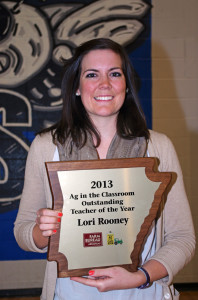 Lori Rooney, a family and consumer science teacher at South Side Bee Branch High School in Van Buren County, was honored as the Arkansas Farm Bureau’s 2013 Ag in the Classroom Outstanding Teacher. Rooney was recognized during a special ceremony at the organization’s 79th Annual Convention at the Marriott Hotel and Statehouse Convention Center in Little Rock.

Farm Bureau established the award in 2006 to recognize teachers who have exemplary programs which integrate agricultural concepts into their curricula.

Rooney graduated from the University of Central Arkansas in 2009 with a Bachelor of Science in Education degree in Family and Consumer Science and is working on a graduate degree in Library Media Technology. She joined the high school faculty at South Side Bee Branch in 2011. As part of her curriculum Rooney teaches agricultural concepts in her classes on Food and Nutrition, Career Orientation, Human Relations, Nutrition and Wellness and Child Development.

“It is extremely important to educate young people, especially high school students, about produce, meats, dairy and different aspects of agriculture,” Rooney says, “because it plays such a big role in our lives every day. High school students are at the prime age to make decisions about what foods to eat, their nutrition and the habits they will create as they become adults.”

Rooney’s students are involved in a number of activities that teach them about agricultural economics. One of these is Van Buren County Farm Bureau’s Holiday Menu contest. As part of the contest the students had to shop for healthy, nutritious foods incorporated into a holiday meal on a budget.

Because most of Rooney’s lessons incorporate experiential learning, they are covered in the Common Core Curriculum Standards. In the clothing segment of Family and Consumer Science, the students discuss the production of clothes, different fibers and where they come from, including natural fibers such as cotton and wool.

As the 2013 AITC Outstanding Teacher, Rooney received an expense-paid trip to Minneapolis, Minn. to represent Arkansas at the National Ag in the Classroom Conference, June 25-28,2013.