The Birth of the American Legion 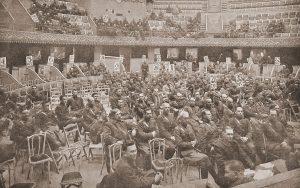 The American Legion was chartered by Congress in 1919 as a patriotic veterans’ organization. Focusing on service to veterans, service members’ communities, the Legion evolved from a group of war-weary veterans of World War I into one of the most influential nonprofit groups in the United States. Membership swiftly grew to over 1 million, and local posts sprang up across the country. Today, membership stands at over 2.4 million in 14,000 posts worldwide. The posts are organized into 55 departments: one each for the fifty states, along with the District of Columbia, Puerto Rico, France Mexico and the Philippines.

Over the years, the Legion has influenced considerable social change in America, won hundreds of benefits for veterans and produced many important programs for children and youth.

Following is a chronology of significant dates in Legion History:
March, 1919
Members of the American Expeditionary Force convene in Parish for the first
American Legion caucus.

May, 1919
St. Louis Caucus. “The American Legion” is adopted as the organization’s official
name. The Legion’s draft preamble and constitution are approved.

November 10-12, 1919
First Legion convention convenes in Minneapolis. The Constitution and Preamble are
adopted. The Delegates voted to locate the Legion’s national headquarters in
Indianapolis, instead of Washington. A resolution is passed in support of Boy Scouts
of American. Today, the Legion is the chartering agency of more than 1,700 Scouting
units made up of approximately 64,000 youths.

In the 1920s The Legion’s efforts result in the creation of the U. S. Veterans Bureau, forerunner of the Veteran’s Administration. They also adopted the first “Flag Code”, and were in the forefront of efforts to pass a constitutional amendment to protect the U. S. Flag from physical desecration.

In the 1930s The Sons of The American Legion is officially recognized during the 1932 National Convention. The first American Legion Boys State convenes in Springfield, IL. Today more than 19,500 young men participate in Boys State, and 98 in Boys Nation, from 49 of the 50 states.

In the 1940s The Preamble to the Constitution of The American Legion is changed for the first and only time since it was written in 1919. The word “War” is changed to “Wars”. The first draft of the “GI Bill of Rights” … is created and considered the Legion’s single greatest legislative achievement, and President Franklin D. Roosevelt signs into law the “GI Bill”. The Legion and the American Legion Auxiliary present a small struggling organization called the “American Heart Association with a $50,000 grant, to study prevention and treatment of rheumatic heart disease.

In the 1950s The Legion votes to contribute funds to the field of mental health, thereby playing a key role in launching the National Association for Mental Health.
In the 1960s The Legion voices great concern of the fate of prisoners of war in Vietnam. Today the Legion urges a full accounting of all POWs and troops missing in action.

In the 1970s The Legion sponsored Freedom Bell goes aboard the Freedom Train during its tour of the country in celebration of the U. S. Bicentennial.

In the 1980s The Legion presents a $1 million check to the Vietnam Veterans Memorial Fund for construction of the Wall in Washington, becoming the largest single contributor to the project. The Legion announces its sponsorship of an independent study on the effects of exposure to Agent Orange on Vietnam War veterans. The VA is elevated to Cabinet-level as the Department of Veterans Affairs.

In the 1990s The Legion creates the Family Support Network to assist families of service members deployed for operations Desert Shield and Desert Storm. The American Legion announces partnership with the Smithsonian Institute’s Air and Space Museum to develop an exhibit for the bomber Enola Gay. The Legion presents its first National Law Enforcement Officer of the Year award.

In the 2000s In 2000 The American Legion presents the first “Spirit of Service” awards. In 2001 Legion passes a resolution to rekindle the “Blue Star Service Banner” program. In 2002 The Legion takes lead in conducting “A Day to Remember” events to mark the first anniversary of the terrorist attacks on the nation. Delegates at the 87th National Convention voiced their support for the global war on terrorism. In 2007 The Legion adopts The American Legion Riders. In 2008 President George W. Bush signs into law the Post-9/11 Veterans Educational Assistance Act, a next generation of the GI Bill. In 2010 The Legion officially made the USAA, a veteran-founded insurance company the American Legion preferred provider.

The above is a brief history of the American Legion from its founding in 1919.

As stated at the beginning of this article, Fairfield Bay is one of those 14,000 posts established worldwide since the inception of “The American Legion.” In 1919.

The Fairfield Bay American Legion, Post 333 had its beginning in 1981. Their first meeting was held in September of 1981 at the Fairfield Bay Country Club. Officers were formally installed January 24, 1982. The new Legion was presented its Permanent Charter by the State Commander, Glen Bennett of Calico Rock, as well as its U. S. Constitution.

The first All Veterans’ Dinner was held at the Fairfield Bay Civic Center on November 13, 1982, and there were 150 persons in attendance. The American Legion Auxiliary assisted the Legion in preparing for all of their dinners and other functions through the years.

As the Legion grew and the American Legion Auxiliary partnered with them, they held numerous events which were referred to as “Fun Times at Legion Fun Days”. They had picnics, horseshoe competitions, birthday parties, and potlucks. Some of these events had entertainment and dances. They thoroughly enjoyed getting together … not just for the business meetings but to celebrate life.

Each year, of course, there were always Poppy Distributions, celebrations of Memorial Day, 4th of July and Veterans Day dinners, for all to attend. In later years, they began hosting Fish Fries, Spaghetti Dinners, Chicken Extravaganzas, etc., inviting the public as fundraisers for the various projects.

In 1985, the American Legion … state and local … became very vocal when there was talk about not allowing the Vietnam Memorial placed on the Capitol grounds in Little Rock. There was much controversy in local newspapers that this memorial should be placed somewhere else. This memorial was a sincere and honest attempt to create a lasting tribute to so many men and women who devoted a portion of their lives to the service of their state and country, nothing more. Contributions for its completion were being received daily.

In 1986 they were instrumental in establishing a “Blue Star Memorial”, which was maintained by “Gold Star Mothers”, those who had lost sons in the wars. In 1987 the supported the community with the establishment of “The Lions Club” and attended the dedication of the “Lion’s Den”. Also in 1987 The Commander of the American Legion presented Nick Gray, General Manager of Fairfield Communities with an “Americanism” award because for Fairfield Bay’s continued display of the American Flag in Lakewood Village Mall.

The years passed quickly, and in the 1990s the men would take to the kitchen to prepare American Legion dinners, preparing a variety of soups and desserts furnished by the Auxiliary, for, at times, as many as 340 area residents to enjoy at the “Legion Hut”.

Also in the 1990s the American Legion supported a movement to help stamp out our teenagers’ use of drugs. In particular, in October of that year they featured an article in the Fairfield Bay News “Grounded At Age 16”, when a young student died of drugs … Their campaign, “Get caught just once doing the wrong drug, or the wrong combination and you’re Grounded!! That’s Final”, with a picture of a coffin. Their message was … 12,000 high School students were GROUNDED during the 1989 – 1990 school year … SAY NO TO DRUGS!! This project was near and dear to their hearts.

In 1992 they introduced “Cash Bingo” as a means of earning money to fund their various projects. Their first ad the Fairfield Bay News was in large boxed area … “Welcome to Fairfield Bay!! During your visit, be sure to stop by the American Legion Cash Bingo. It was held at their American Legion Hall near the marina at the corner of Greenwood and Hwy. 330. A Fairfield Bay Veterans Club. Dinners Open to the Public Every Third Friday 5 – 7 p.m.” That was just the beginning of Bingo at the American Legion. The Ladies’ Auxiliary served food at these events to fund their various projects and to help establish a “Scholarship Program” for young women.

In February of 1992 the Legion also conducted a ceremony to honor the “Four Chaplains” who gave their life jackets to others when the U.S.A.T Dorchester was hit by a torpedo in the historic footnote of World War II. Fr. H. Paul Strassle of St. Francis of Assisi joined other pastors and ministers in this ceremony. The “Four Chaplains” of three faiths stood united in prayer as they went down with the US.A.T. Dorchester, which symbolized for all Americans and for all time the unity of this nation founded upon the Fatherhood of one God though His children may be of different faiths and races.

Other events the Fairfield Bay American Legion, Post 333 participated in were on one Memorial Day, they celebrated it at the Marina on a barge, to honor navy personnel who had been lost at sea. One of their projects was to donate funds to the Fairfield Bay Volunteer Fire Department toward the purchase of a “Jaws of Life”.

In later years, they published a monthly “American Legion Newsletter”, showcasing both the Legion and the Auxiliary, participated in “Lake and River Shoreline Clean Ups”, sponsored “Treasure Hunts” and hosted the American Legion, District 2, AR “Cavalcade 2002”. This is also the year they began celebrating “Patriots Day”, now a day to remember … remembering the 9/11 attack on the Trade Center in New York City.

In 2014 the proceeds from that tournament were given to the “Fisher House”. This organization provides housing and meals for veterans and their families while they are receiving treatment for their injuries in a VA hospital. Golfers were once again treated to breakfast and lunch, as well as beverage carts during the tournament to deliver snacks and beverages.

This year, 2016 was enjoyed by all. Right after lunch the golfers participated in a raffle for various prizes, each anxiously waiting to see if their number would be called for the 55” HD LED TV. Proceeds this year went to a Christian ministry which trains service dogs for veterans who suffer from PTSD. After these dogs are ready for their veteran, they can sense, smell when that veteran is about to go into a seizure or go into depression.

In 2015 Post 333 hosted the District 2 meeting at the Little Red Restaurant, after the business meeting, those attending were invited to go the Marina to take part in the dedication of the Fairfield Bay Veterans Barge”. The day was warm, but the dedication was somewhat emotional and affected all attending. One highlight for the Legion members was the fact that the District 2 Commander, Joe Joslyn, who was a disabled veteran, having lost one leg, was asked to say a few words. Joe, like the others in attendance was experiencing a very emotional moment as he thanked everyone for making this wonderful barge available to our disabled veterans. We have since lost our District 2 Commander to an accident in his motorized wheelchair. He has gone to join our Supreme Commander.
In preparing this history of Post 333, I have felt honored as I went through book after book and discovered some awesome events which have taken place for Post 333 from its infancy to 2016. It has been an exciting adventure.