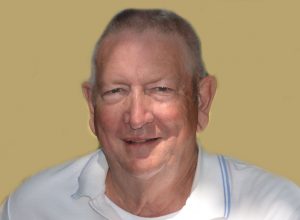 On July 05, 1968, married Nora Kathleen Macey. She survives in Alabama.

He was a member of Highland Pistol and Rifle Club.

Warren was born in Centralia, IL; he moved with his parents to Highland, IL, when he was 10 years old. He was a 1958 graduate of Highland High School. While in High School, he was a starting member of the basketball team that played in the Elite 8 for the State Championship. Also, his senior year, he was a pitcher on the baseball team that appeared in the Elite 8 for baseball State Championship. He played basketball for four years at Arkansas State University on a scholarship. After graduation, Warren took a job with Dempsey-Teglar Investments in St. Louise (where he met his wife, Kathy). After marrying, they moved to Little Rock, AR in 1969. Warren worked for Dabbs, Sullivan & Trulock and T.J. Rainey and sons for the 22 years, while they were there. Mr. and Mrs. Moore moved to Birmingham, AL in 1991, where Warren was employed by Southtrust Securities and eventually retired in 2005 during the merge to Wachovia. Mr. and Mrs. Moore moved back to Highland in 2005 and lived there for 12 years until moving to their lake house in Greer’s Ferry Lake near Clinton, AR, in 2016. They had just moved back to Bessemer, AL, in August of this year to be closer to family. Warren enjoyed fishing and hunting and spending time at the Lake.

Arrangements are being handled by Spengel-Boulanger Funeral Home in Highland, IL.

Graveside funeral service will be at 11:00 AM on Friday, October 27, 2017, at Hillcrest Memorial Park in Centralia, IL., with Rev. Greg S. Brady officiating.

Interment will be at Hillcrest Memorial Park in Centralia, IL.

Memorial contributions may be made to American Cancer Society.