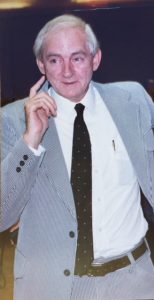 Stanley Wing Handford, 83, of Fairfield Bay, Arkansas passed from this world on November 08, 2017. Stanley was born on February 19, 1934 in Bartlesville, Oklahoma to the late Charles Dewitt and Charlotte Robertson (Carroll) Handford. He married the love of his life Doris Carolyn Handford in November of 1955 at the St. Paul Episcopal Church in Batesville, Arkansas. Stanley spent most of his life in Real Estate doing what he loved. He helped to start his beloved home of Fairfield Bay where he brought his family to live and where he later retired with his wife. He enjoyed music and singing to everyone, telling jokes and laughter. Stanley was a man who loved to chat and always had a good story to tell, but more than anything he loved his family. His wife and kids were his whole life. He was a God loving man and walked by faith, his family takes comfort knowing he is now with his Lord.
Stanley is preceded in death by his parents, one brother Charles Carrol Handford, a sister Mary Josephine Baker, and an infant son Christopher Farrel Handford.
Left to cherish the memories they made are his son Scott Handford of Fairfield Bay and a daughter Kimberly Diane White and husband Mark White of Fairfield Bay, four grandchildren; Joshua Cole Witt, Savannah Alexandria White, Jarrett Aleczander Handford, Clayton Scott Handford, three great-grandchildren; Jarrod Cole Copeland, Braxton Thomas Wing Ezell, and Ireland Grace Witt, as well as two sisters; Harriet Elizabeth Handford and Charlotte Ellen Handford, both of Batesville, Arkansas.
Funeral arrangements are under the care of Roller-McNutt Funeral Home in Clinton, Arkansas. There is a Memorial scheduled for November 17th at 11 A.M at the Maranatha Church in Shirley, Arkansas. Online guestbook can be found www.rollerfuneralhomes.com/clinton