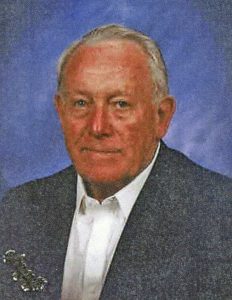 George E. Spore, 91, of Fairfield Bay, Arkansas was born May 17, 1926 in Wenona, Illinois to the late James and Bessie Pearl (Maddin) Spore and passed from this life on October 23, 2017 at his home with his loving family at his side.
George was born, worked and raised a family in Illinois. He was an operations manager for the Northern Illinois Gas Company for 40 years. At the age of 60, he and his wife, Bernadette, retired to Fairfield Bay, Arkansas and lived in “Happy Valley” for 31 years.
George served honorably during WWII. He served with the US Army 7th Cavalry Mechanized Reconnaissance Troop, stationed in the Philippines, as a mortar NCO. George supervised 12 enlisted men in setting up heavy mortars, also in aiming and firing of weapons from both carrier and ground mounts. He enjoyed household projects, living on the lake and visits with grandkids.
He is preceded in death by his parents, a daughter, Jane Ann Guler, two sisters and three brothers.
Left to cherish his memory are his wife, Bernadette Spore, of the home, two sons; Robert Spore of Geneva, Illinois, Edward Spore (Laura), of Overland Park, Kansas, one daughter, Alice Ramponi (Steve) of Petaluma, California, eight grandchildren; Brian Mount, Adam Spore, Katie Grisell, Christopher Spore, Jennifer Taylor, Nicholas Ramponi, Jessica Spore, Sarah Spore, five great grandchildren; Henry Mount, Addison Spore, Charlie Mount, Annabelle Spore, Emma Grisell, other relatives and many friends.
A Memorial Service with military honors will be held at 10:00 am, Friday,
October 27, 2017 at the St. Francis of Assisi Church in Fairfield Bay, Arkansas. Entombment will immediately follow in the Church’s columbarium.
For online guestbook, www.rollerfuneralhomes.com/clinton.