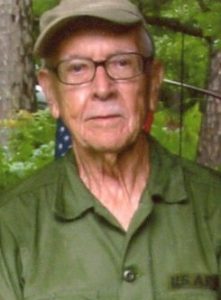 He is survived by one daughter Carol (Philip) Sallee; one son, Joseph (Linda) Radford; eight grandchildren; and four great grandchildren. He was preceded in death by his wife, Henrietta Tomlin Radford; one daughter, Mary Lou Radford; and one brother, Samuel Radford.

Mr. Radford graduated from Springfield High School and went on to earn a Bachelor of Science degree in Mechanical Engineering from the University of Missouri School of Mines and Metallurgy. He was a veteran of the United States Navy, serving during WWII from Sept. 22, 1945 to August 13, 1946, and later served with the United States Army during the Korean War, from Nov. 27, 1950 to Nov. 26, 1952. Following his military service, he was a mechanical engineer, working for Barber Coleman in Rockford, IL and then Molex in Naperville, IL He retired in 1987 and moved to Fairfield Bay. There he enjoyed the warm weather where he could garden, carve wood, play pickleball, and create his ClareLynn Park.

Private burial will be held at a later date in Greenwood Cemetery in Rockford, IL. The Buchanan & Cody Funeral Home and Crematory in Jacksonville is in charge of arrangements.