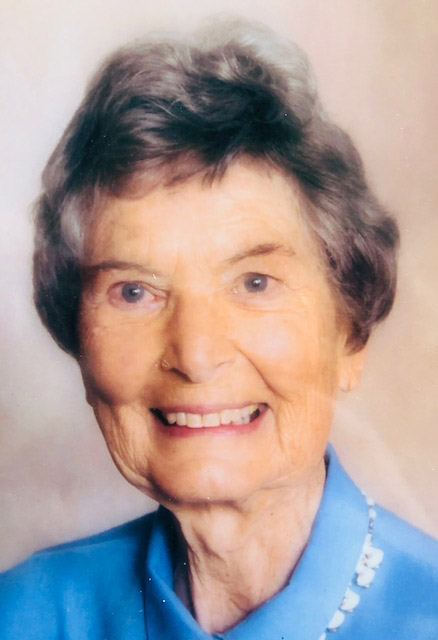 Alice Fletcher Frevert, age 96, of Indianola, Iowa passed away at her home on February 16, 2018 with her family at her side.

She was born May 30, 1921 in Davis, California the daughter of L. J. and Ruth Fletcher. She was preceded in death by her parents, two brothers, Robert Fletcher and James Fletcher, and her husband Wesley David Frevert whom she married in June 1944.

She was a beloved wife, mother, grandmother, and great grandmother. She had a fun-loving spirit, was witty, kind, and generous to all those she met. She was an accomplished seamstress and made most of her clothes in her adult life. She loved all shades of blue and she decorated her apartment in those hues.

She graduated from Peoria High School in 1939 and upon graduation attended Iowa State University in Ames, Iowa where she met Wesley David Frevert. In 1947 the couple moved to West Des Moines, Iowa where Dave started his architectural practice. Alice spent many hours volunteering at Grace Methodist Church and for other civic organizations. They then lived in Fairfield Bay, Arkansas for sixteen years. In 2003, after Dave’s death, she became a resident of The Village in Indianola, Iowa where she resided at the time of her death.

A memorial service will be held at The Village, Indianola on Tuesday, March 6, 2018 at 2:00 p.m. In lieu of flowers, memorials may be made to WesleyLife Hospice. To submit an online condolence, visit our website at www.overtonfunerals.com.