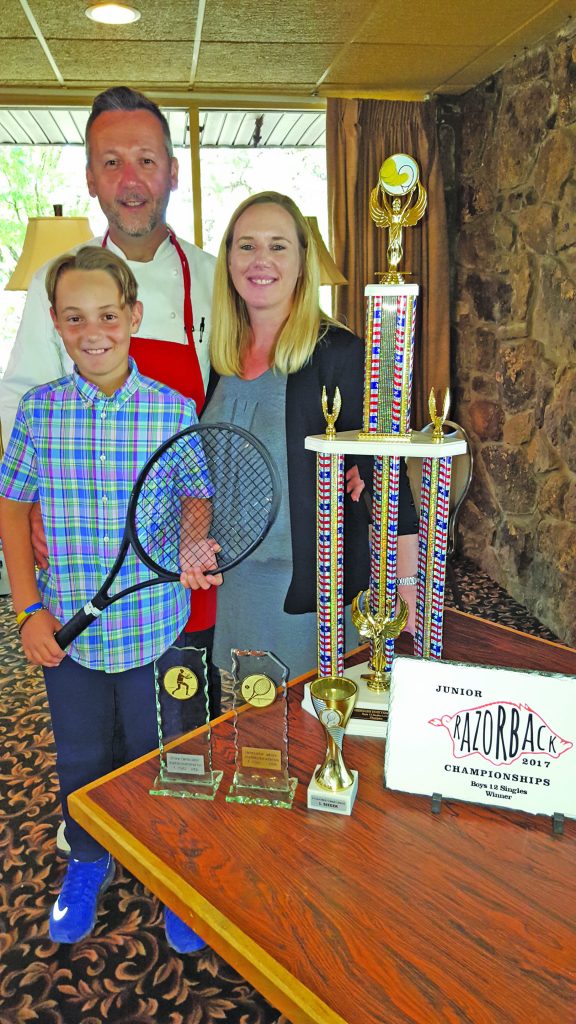 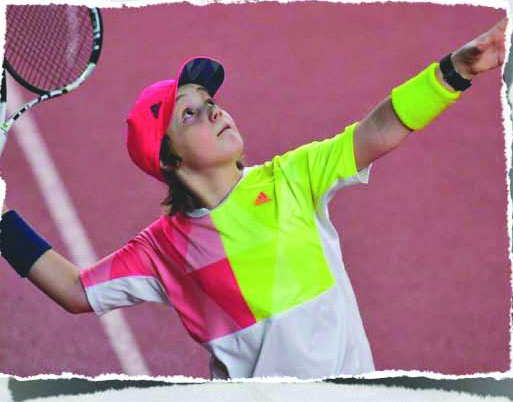 Devin Ruhotina, upcoming tennis star at age 12, ranks 1st in Arkansas in his age bracket, 101st in U.S. Southern Division, and 130th in German Nationals. Devin was our guest speaker at a recent Rotary meeting on Wednesday, October 25. Everyone marveled that he could present such a wonderful Power Point presentation with such poise and confidence at such a young age.
Devin describes himself as a competitive tennis player that has played in tournaments in Germany, Bosnia, Belgium and the United States. Devin said: “my very first experience was when dad introduced me to a tennis racket and ball at age two on the courts here. I began training when I was almost four years old.” His first tournament was in 2013 in the under age 8 bracket.
Devin fondly refers to his “tennis story” starting at age four. Reminiscing, he related: “for my first eleven years of my life, I grew up in Germany where I attended an International School, and I was a member of the Frankfurt Tennis Academy. I had the good fortune of being here in the summer with my grandparents, and I competed in Arkansas and Florida matches. In Germany I was selected to join the regional squad for talented players and took part in their meets.” His first tennis tournament began in 2013 at age 8. He would go on to win championships as Devin progressed up the age brackets. Dad remarked, “for opportunities at an early age, the European sport academies nurture future athletes.,” Devin related: “the playing level is quite high, and it provides good opportunities to practice and be a part of a team. “
Competing in Europe provided many opportunities to be exposed to male and female tennis peers and stars at such events as the British and French Open. Devin became excited to express his joy at winning the Junior Doubles Trophy in 2016. He happily said: “by winning this tournament, I even got to be a ball boy at the MLP Cup 2016.
Devin described competing: “winning is the best feeling ever! I have won 26 tournaments since I started competing four years ago. Some matches have been very difficult, and you never forget them. Consequently, I learned the most from the ones that I lost.” For doubles, Devin teamed up with Spencer Holloway from Fayettteville. News Flash! This past weekend, Devin competed in singles and doubles with Spencer Holloway in Fayetteville to win both events at the NWA Legacy Bank Fall Championship. Way to go guys!
Devin took time to explain his career plans. Many of his goals can be a path for any young person to follow. Devin described his life goals this way: “my goal is to become a professional tennis player and reach the Top 10! Being a professional athlete is something I work on every day. It is important to be healthy; work hard physically and mentally, and accept failures as well as successes. I have learned to set high goals for myself; stay disciplined; accept my mistakes; and keep focused even when the situation seems hopeless. Through these struggles, I found that I am capable of so many things that I did not think I could achieve. Sometimes the most important thing you can do is just stay calm and keep waiting for your opportunity. If you give it your best and keep trying, it will come true. Just believe in yourself and then anything is possible!”
Tennis is a sport that demands lots of practice. Come out to one of the high school tournaments or even watch Devin who is out on our courts five days a week after his academic studies are completed. Devin also trains several times a week at the Little Rock Racquet Club.
Coach Nick and star Devin have accomplished many feats along the way. We want to be on their “fan club” to offer encouragement as Devin seeks future triumphs.
Proud and supportive parents are Nick and Kelly of Fairfield Bay who recently were selected to manage the Little Red Restaurant. Kelly is the daughter of Jack and Kathy Weeks. She followed her dreams after high school and attended college in Germany. Kelly chose to stay and work in Europe, and pursued a career in graphic art and marketing, A few years later, she met Nick and got married. Subsequently, they became a team and followed similar careers in the restaurant business. This family is not new to Fairfield Bay since they had visited Kelly’s parents each summer. Nick and Kelly operated several start-up restaurants for several years prior to opening their first restaurant in Darmstadt, Germany in 2012. We are thrilled that they accepted joint management positions at the Little Red and bring a Mediterranean and German flair to the dining pleasure at the Little Red.