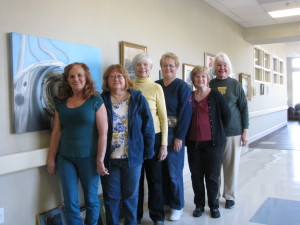 Members of the North Central Arkansas Artist League hung a new exhibit at the Ozark Health Medical Center on Monday, January 13. The theme of “Imagination” includes visions created by the artist and communicated to the viewer through paint and color. Paintings include sea serpents, monsters, butterflies, fish, visions, colorful abstracts, landscapes and flowers. Even realistic subjects depend upon imagination both by the artist and the viewer to convert a three-dimensional subject into two dimensions.

The public is invited to view the free exhibit, located on the second floor of the hospital in the hallways adjacent to the cafeteria, near the nursing home entrance. The exhibit is open from 8 a.m. to 9 p.m. through April 8. For further information about the exhibit or the Artist League, contact Joyce Hartmann, 745-6615.