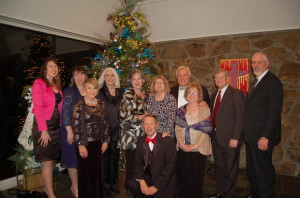 Despite a one month delay and some of the worst road conditions in Van Buren County on the days leading up to the event, the Ozark Health Foundation’s Festival of Hope and Lights Gala raised nearly $18,000 for scholarships and medical equipment. The Gala was originally scheduled for December 6, but because of the December ice storm, the event was changed to January 10.
This year’s Gala showcased some new things that were big hits. To celebrate their 25th Anniversary, Faye’s Diamond Mine partnered with the Foundation to provide patrons with an opportunity to purchase a mystery gift box that held a gem stone or gift card. John and Sunny Hargis were lucky enough to buy the box that included the $1,000 Gift Card. Thanks to Faye’s Diamond Mine, the Foundation was able to raise an extra $2,500.
Also, new this year was entertainment by the Christian Quartet, Sounds of Praise. The members of Sounds of Praise: Doyle Scroggins, Cindy Wellbenberger, and Bob and Wilba Thompson, serenaded the crowd with classic hymns and provided lively, upbeat entertainment during dessert. After a delicious dinner prepared by Clint Stevens and the Indian Hills Country Club Staff, the winners of the Silent Auction items were announced by Foundation Board President, Fred Herman, and then a Live Auction was conducted by Frank Howell of Fairfield Bay.
Before the evening concluded, Dr. Hank Wallace shared with the Gala guests the need for a new C-Arm Machine for performing surgeries at Ozark Health. The C-Arm Machine is used to take X-Rays during surgery, and both Dr. Wallace and Dr. Steve Schoettle feel that the C-Arm that they are currently using is adequate but that overall a new C-Arm Machine will benefit surgery patients at Ozark Health.
Events like the Gala would not be possible without a large group of people working together. The Foundation would like to thank all of the area businesses who donated live and silent auction items, the individuals who attended the event, the Foundation Board Members who donated so much of their time to make this event successful. A special thanks also goes out to the 2013 Gala Chair, Linda Duncan, and committee members Cindy Wellenberger, Sue Scroggins, Ken Winberg, Marianne Winberg, Nancy Green, and Kristi King. If you are interested in attending future Foundation events, please contact Tawny at (501) 745-7004 ext. 106 or via e-mail at [email protected]