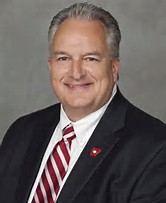 Treasurer of State Dennis Milligan announced today he is running for reelection for Treasurer of State in 2018.
“I came into office promising I would challenge the way things have always been done,” Milligan said. “The results have been positive and I am humbly asking the citizens of Arkansas to give me one last term to finish the job I started almost three years ago.”
Milligan said the dramatic increase in return on investments during a period of historic low interest rates, the tremendous growth and reduction of fees in the Arkansas 529 college savings program, and the introduction and growth of the financial literacy program under his administration are three major reasons he’d like to continue the work under another term.
“I took office from an elected state treasurer who had stolen and cheated the taxpayers to benefit herself. In just three years, I have turned the office around and made the state well over $118 million from investment returns rather than costing the taxpayers money. Those returns have been so significant that even the Governor and Legislature now – unlike in the past – count on them to match federal highway funds and build up the state’s long-term reserve account.”
“While I just earn the money, and don’t decide where to spend it. I’m glad the additional money I have earned the state is going to help our state build additional roads – which means better and safer travel for our citizens and an additional tool to recruit new businesses to Arkansas,” Milligan said. “Also, the long term reserve account is the state’s piggy-bank for when, not if, we hit an economic downturn.”
Milligan said that as a result of the work his office has done, the state has received a better financial rating, which means better financing on bonds and public financing when needed.
Milligan earned the state $22 million in fiscal year 2015, $48 million in FY 2016 and $57.5 million in FY 2017. During that same time, interest rates were between zero and 1.25%.
Milligan said that the returns are a result of active management and not accepting how the office has always worked in the past.
Milligan explained that the growth in the Arkansas 529 program during his administration is another reason he is seeking a second term.
“The past administration gave the Arkansas 529 College Investing Program little more than lip service,” Milligan said. “I’ve personally gone out, promoted and hired directors who have aggressively sought ways to grow the program. Getting parents, grandparents or others to save something for a kid’s future educational needs – whatever that might be – and get a state tax deduction while they are at it, is a win-win for the citizens of Arkansas.”
The Arkansas 529 program has grown by over $130 million since Milligan took office, resulting in two fee reductions for investors. Those fee reductions mean more money is staying in the beneficiaries’ accounts. Milligan also championed additional tax deductions for the program this last legislative session, resulting in a carry-forward provision, out-ofstate tax deduction, and an employer tax deduction.
“All of this shows the passion I have for building a solid foundation for the children in our state, whether that is through a traditional four-year college education or a vocational or technical education,” Milligan stated.
One of the promises Milligan made the voters when he ran for office was that he would “stand with Israel.”
“Shortly after coming into office, I asked my team to figure out how the state could invest in Israel and make a good return for the taxpayers. After two long years, this past legislative session members of the legislature took my request, crafted and passed legislation that the governor signed,” Milligan said. “Recently, the State Board of Finance adopted the new state law into board policy. I’m waiting on a public comment period on that policy to be finished and the legislature to approve the new rules and regulations; then, I hope with the support of the governor and board, I’ll invest in Israel as long as it’s a good deal for the taxpayers of Arkansas.
“Another promise I made the voters when I ran for this office was to promote and be an advocate for financial literacy. I felt strongly then and still do that our children need a good education in the basics of personal finance,” Milligan continued.
“As the state’s banker and chair of the Arkansas 529 College Investing Board, it is critical to me that our citizens are financially literate and competent. They are better off for it and we as a state are better off for it,” he said.
The AR Finance AR Future program has been in over 148 schools in two years and has reached over 19,400 students. It has resulted in a 36% knowledge gain increase in financial education all across the program platform. The focus of the AR Finance AR Future program has been in grade four through six all across the state.
A couple of other promises Milligan made to voters was that neither he nor anyone in his office would accept gifts from those the office did business with. This changes the culture of the office to keep it from doing business only to get favors in return. “There are no more backroom, pie box deals going on in my administration,” Milligan stated.
“All in all, I’d say promises made, promises kept. Changing the culture of the Treasurer’s office hasn’t been easy; we’ve still got a ways to go,” Milligan said.
“That’s exactly why I’m seeking another four-year term. I feel strongly that the hardworking taxpayers of Arkansas will benefit if I can make these changes in the Treasurer of State’s office – where we focus on customer service and results. There are always bumps in the road to achieve progress, and I’m humbly asking the voters to judge me on the end results.”