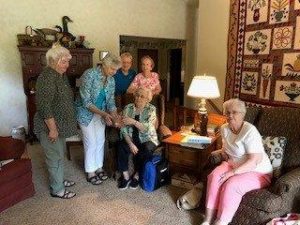 The Davis Special chapter of Questers met in the home of Gail Zanoff on Monday September 18. Gail Zanoff presented the program on Blenko Glass, a company known for it’s exquisite, colorful individually blown bowls, bottles with stoppers, pitchers, vases, stemware,various animals, and seasonal décor items. Some of them are formed in casts made of hand carved wooden dark cherry wood. The business was started in England in the late 1880’s, but moved to Milton, West Virginia when the founder of the company wanted to use gas heat instead of the coal in England. Shown left to right are Bonnie Tatom, President; Gail Zanoff, Secretary; Jane Hempstead, and Elda Gerndt. Standing in back are Fran Schroeder, Vice President and Lea Berry. The picture was taken by Linda Bittle, Treasurer.