Judge Hooper asked Janet Carson and the VBC Master Gardeners to review the site and submit suggestions and a working plan to update the landscaping to complement the newly renovated native stone Courthouse that was originally constructed in 1934 with the assistance of the Works Progress Administration’s (WPA).

Carson stated; “It (the courthouse) is a neat historical building and with the right landscaping it will look fantastic.” “They plan to put in a sprinkler system and plant the entire property, which right now is almost a blank slate.“ 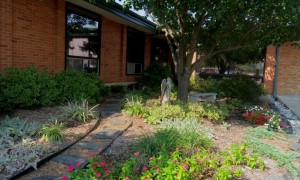 Anyone interested in becoming a Master Gardener can call Danny Griffin, VBC Extension Agent, 745-7117 or Eleanor Hilsenrath, President VBC Master Gardeners, 501-252-7272 for an application for the 40 hour training sessions. Applications are due by October 23. 2013 Classes will be held each Tuesday November 5, 2013 through December 3, 2013.

This meeting is open to all eligible persons without regard to race, color, national origin, religion, gender, age, disability, marital or veteran status, or any other legally protected status. Persons with disabilities who require alternative means for communication of program information (large print, audiotapes, etc.) should notify the county Extension office as soon as possible prior to the activity.