“I don’t want to be an anointed couch potato!” 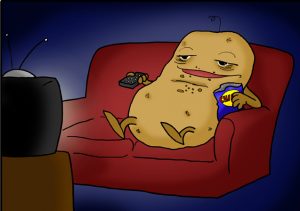 Reinhard Bonnke was an evangelist to Africa. Literally, multitudes of people would come to his services and millions of people would get saved and healed. Well, never mind. Just read this. At one of the events my family goes to, we had the opportunity to hear him speak, and that quote is from then. It is a challenge to do something, to step out in the power of Jesus. Look at what can happen when we get off the couch!
God does not sit on couches. He moves. He takes His pinky finger and stirs things up, singing the entire time. God doesn’t want us to sit on couches. He wants us to move with His heartbeat and do the things He calls us to do. He saw us. He chose us. And it is up to us to stay off the couch. We are meant to be busy in the things of Him. So get up! Remember the possum? Get up! Do something! Look at what can happen! You might not convert millions of people at a time, but God doesn’t judge on that. He wants you to simply be obedient and He will do the rest. You just need to get off the couch and watching things on the other side of the glass. Live in obedience and watch what He will do! Get up and run the race!