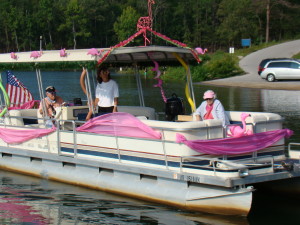 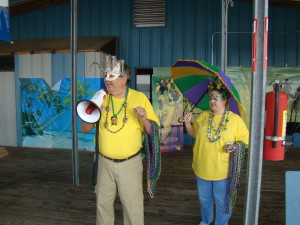 A line of floats, jesters and dogs wearing beads, gumbo and jambalaya and you’d think you were at Mardi Gras.  This was in Fairfield Bay not New Orleans.  The Krewe of Jester held the first annual Boati Gras at the FFB marina.

Boats from around the area were gaily decorated with jesters, flamingos, flags, and people with funny purple, gold and green pointy little hats. Kids and dogs were all over the place.  Despite a rain delay two weeks early, Boati Gras took off in spectacular fashion on Saturday, February 17, 2013.

Boats festively decorated lined up just outside the marina in single file.  Before the parade started, Pastor Ken Reese of the Fairfield Baptist Church, with a megaphone on a boat parked to the side of the fleet, offered a prayer of safe passage and celebration.  Then after a blast of horns the parade began.

The procession moved back inside the breakwater, by the campground and swimming area.  With cheers and shouting the line of floats passed around the inside of the marina, throwing beads and trinkets to surprised parade watchers.

“This is just the beginning,” said Jim Beach this year’s King of Jester, “Next year will be even bigger and grander.  It ended too soon for everyone so we will be adding more activities for the next summer like a cookout on the lake after the parade.”

One of the best “float on a boat” belonged to George and Brenda Haggard.  Bob Ayers, of Olive Branch, MS, constructed a beautiful 9 foot tall jester-fish in Memphis and hauled it to the Bay for the parade.  He and his sister, Linda Pratt, who talked him into it, mounted it on the Haggard’s boat. After the parade Bob said, “Wait until you see what I come up with for next year!” 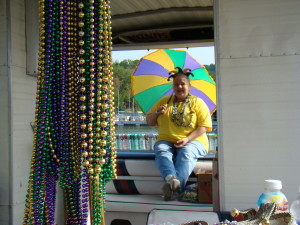 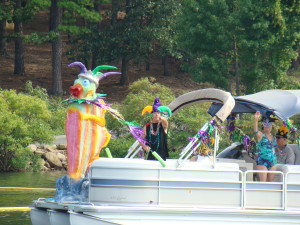 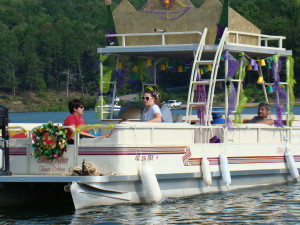 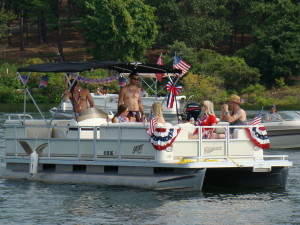 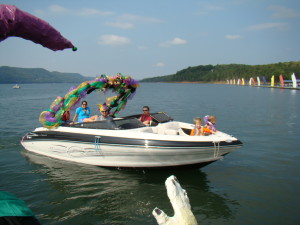 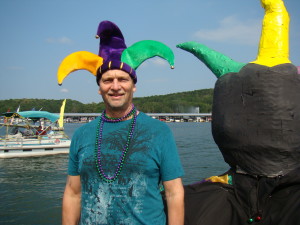