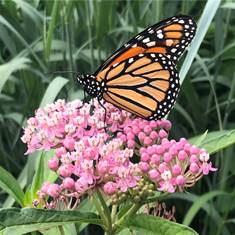 Little Rock, Ark. — Sept. 19, 2018 — Arkansas Electric Cooperative Corporation (AECC) is supporting the Arkansas Monarch Conservation Partnership during the Fall migratory season by participating in current research on the monarch butterfly population.
“The Arkansas Monarch Mapping Project is an opportunity for Arkansans to identify where and when they see monarch butterflies around the state,” said Casey Shepard, environmental engineer for AECC and member of the partnership steering committee. “This will allow biologists to tailor conservation and management strategies for this species, which has experienced significant population declines in the past several years and is under consideration to be listed as a threatened or endangered species next year.”
According to Shepard, monarchs begin migrating through Arkansas in late August and early September as they make their way from the northern United States and Canada to their overwintering grounds in Mexico. In the spring, they begin migrating north, making their way back into Arkansas in early April.
Anyone who observes a monarch in Arkansas is asked to participate in the citizen science project by visiting https://www.inaturalist.org/ to create a free account. Then, click on “Add Observations” and tag the “Arkansas Monarch Mapping Project” under “Projects” to begin contributing data. A downloadable app, iNaturalist, is also available to document sightings. Data gathered with help identify important breeding areas and migration corridors for monarchs as well as better understand the timing of both spring and fall migrations.
According to Shepard, AECC and the state’s electric cooperatives are dedicated to assisting in the preservation of Arkansas’ natural resources for present and future generations.
Arkansas’ 17 local electric cooperative distribution systems, statewide association and generation and transmission cooperative serve approximately 500,000 members in 74 of the state’s 75 counties. The cooperatives are member-owned utilities established to provide reliable, affordable electric service to farms, homes, schools, churches, businesses and other establishments across the state in a responsible manner.
The distribution cooperatives own and govern Arkansas Electric Cooperatives, Inc. (AECI), a service association for the electric cooperatives, as well as Arkansas Electric Cooperative Corporation, a generation and transmission cooperative, which provides wholesale power to the distribution cooperatives.
For additional information, contact:
Rob Roedel, Electric Cooperatives of Arkansas, 501.570.2296 or [email protected]
www.ecark.org