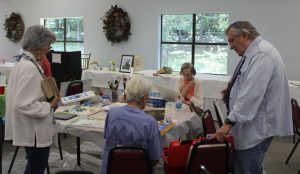 Nationally known artist, Richard Stephens, presented his 16th annual watercolor workshop at the Baptist Church in Fairfield Bay Aug. 21 and 22, hosted by the North Central Arkansas Artist League. Seventeen artists attended, from regional areas as well as Dallas and Lawrence, Kansas. During lunch the first day, members were also able to view the solar eclipse.
A native of Hot Springs, Stephens earned his Bachelor’s Degree in Art from the University of Central Arkansas in 1969. He served in the Army as an illustrator` and began a professional career in 1971 with a design firm in Little Rock. In 1974 he opened his own graphic design studio in Hot Springs.
Stephens began focusing on watercolor in the early 90s, garnering awards, signature status in several major watercolor societies, and national attention for his confident, loose, impressionistic style. His watercolors are based on strong drawings and design; they show masterful brushwork, unexpected colors, and great value contrast.
“My goal is to interpret, not to render. I want to engage the viewer, entertain, and share my vision.”
The son of schoolteachers, Stephens has conducted workshops around the country for 17 years.
He says, “Making art certainly means producing my own work, but it also means sharing with my students my knowledge, experience, and passion for watercolor. I love to teach. I have discovered that through teaching, more than any other endeavor, I continue to learn.”
The NCA Artist League presents an art program the third Monday of every month, and exhibits paintings widely in the local area. For further information or to join the League, call President Charlotte Rierson at 884-6100.