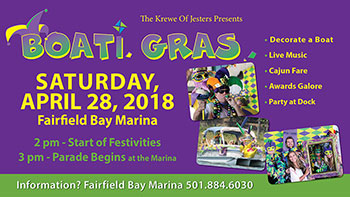 Join the Mardi Gras fais do-do on Greers Ferry Lake – Saturday April 28th
Take one part Zydeco, a pinch of Creole, and a whole mess of fun and laughter, and you’ll end up with the best party on the lake! Laissez les bon temps rouler – “let the good times roll!” Come join Fairfield Bay Marina, Lacey’s Marina, and the Krewe of Jesters as we celebrate Boati Gras, an explosion of color and good times on the water.
Throw me somethin’ Mister!
The water celebration begins at 2pm, with the colorful and exciting boat parade kicking off at 3 p.m. All sorts of boats from around Greers Ferry Lake will be arriving, decorated in their finest green, gold, and purple. The parade will be led around the marina by the FFB tugboat, tossing beads and trinkets to those along the route. The public is welcome to bring their own Krewe, decorate their own boats and participate!

Boati Gras will have authentic Cajun food of beans and rice, music, dancing, awards, and a party on the dock that’s sure to go until the sun goes down. Beads will fly, ducks will bob around, laughter will be heard, and a general fun atmosphere – led by the Krewe of Jesters.

“Kicking off the summer lake activities with Boati Gras is a no-brainer,” says John Conry, Fairfield Bay Marina Manager. “We’re all one big Krewe here, and this year we’re partnering with Lacey’s Marina to make this festival the best one yet.”

For more information, or to gather your own Krewe and boat, contact the Fairfield Bay Marina at 501-884-6030. It’s all good clean fun on the lake, and it’s free to participate. Start your own Krewe and be a king (or Queen) yourself. It’s good to be King!

Schedule of Events (“fun times”)
1:30-2pm – Gathering at the dock (Fairfield Bay Marina)
2pm – Fun, Fol-de-Rol & Fleet regalia with the Town Crier and the 2017 King of Krewe Jesters and his loyal subjects
• Second-line band escorts the Royal Personage & entertains the loyal subjects
• Introduction of His Royal Highness and Court
• A few words of Wit & Wisdom from His Royal Jesterness
• His Most High Jesterness leads the crowd in a line-dance
• The Town Crier tells us all what’s really going on (because only he really knows)
• The Blessing of the Fleet
• The Cleansing of the Fleet
• Kleenex and kazoos are other merrymakers are given out the King parades his subjects to The Boats!
3pm – On with the Parade!
• The Boati Gras Boat Parade begins where beads, rubber ducks and candy come ashore. Merriment ensues!
• Jambalya and Mardi Gras Fare – not to be missed –by the Kirk of the Hills Presbyterian Men’s club.
Following the Parade –
Awards of all types – fit for any King (or Queen). 3 categories: best spirit, most creative & best overall. The traveling Boati Gras trophy goes to the marina with the boat winning best overall
• 5pm – Festival Boati Gras music to dance the night away
#letthegoodtimesroll, #FFBBoatiGras