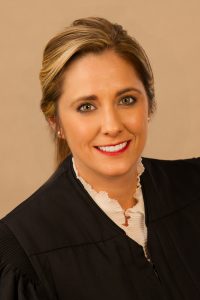 Judge Susan K. Weaver has announced her candidacy for the 20th Judicial District Circuit Court, Division One, which serves Faulkner, Searcy and Van Buren counties, including courts in Clinton, Conway, and Marshall.
Weaver earned a Bachelor of Science degree in Speech-Language Pathology from the University of Central Arkansas and received her Juris Doctor from the University of Arkansas in Fayetteville. She also studied international law in Cambridge, England.
Prior to her election as District Court judge in 2012 and re-election in 2016, Judge Weaver was an assistant case coordinator for 20th Judicial District Circuit Judge David Reynolds and law clerk for the Prosecuting Attorney’s Offices. She served several years as deputy prosecuting attorney for the 20th Judicial District, serving Faulkner, Van Buren and Searcy Counties, and in that capacity learned the importance of incorporating rehabilitation with incarceration to reduce the likelihood of repeat offenders. She has successfully prosecuted both criminal bench and jury trials in Faulkner and Van Buren County Circuit Courts. Prior to being elected as District Court Judge, Weaver also maintained a private law practice handling family law, civil law, criminal defense, appellate law, and trust and estate planning. In addition to her courtroom experience, she has worked at the appellate court level and as a law clerk for the Arkansas Court of Appeals, researching and writing legal opinions for cases that had been appealed from Circuit Court.
Judge Weaver has received numerous prestigious certifications in advancement of her legal training, including certifications from and relating to:
•National Computer Forensics Institute;
•United States Secret Service: Forensics in Court and Computer Evidence Recovery;
•National Center for Missing and Exploited Children: Protecting Children Online;
•ChildFirst Arkansas in Collaboration with National Child Protection Training Center: Interviewing Children and Preparing for Court;
•National Highway Traffic Safety Administration (NHTSA) in DWI Detection and Standardized Field Sobriety Training; and
•Death Penalty Training.
In addition to her mandatory continuing education, Judge Weaver has consistently gone above and beyond that requirement by attending and presenting at state conferences. She also annually attends National Highway Safety Training, in conjunction with her role on the Education Committee, and annual national training with the National Association of Drug Court Professionals (NADCP). She strives to bring the most up-to-date law not only to the bench, but to the rest of the Arkansas District Court Judiciary as well.
Judge Weaver is currently a member of the following professional, civic, and charitable groups:
•District Judges Education Committee, which is responsible for providing continuing legal education to all the district judges statewide;
•District Judges Legislative Committee, which is responsible for legislative proposals that district judges feel may improve the administration of justice within Arkansas;
•American Bar Association;
•Conway Rotary;
•Clinton Chamber of Commerce; and
•HAVEN (Help for Abuse Victims in Emergency Need) volunteer (HAVEN is a residential shelter for abused young females in Conway).
She is also a former Executive Council Member to the Young Lawyers Section of the Arkansas Bar, and she previously served on the Board of Directors of the Boys and Girls Club of Faulkner County.
Shortly after taking office, Judge Weaver established the first Sobriety Court in the 9th Judicial District, a program designed to provide specialized treatment options for repeat alcohol offenders to reduce the likelihood of repeat violations. In a very short time, the program has received accolades and praise from court and law enforcement personnel as well as participants.
“It is imperative that Judges have actual courtroom experience in all aspects of the law over which they will preside, as well as treat everyone with dignity and respect. A Judge should be experienced and impartial, and he or she should apply the law even-handedly,” Weaver said.
“My experience and qualifications as a former deputy prosecuting attorney, a general practice attorney, former Appellate Court Law Clerk, and as a current District Court Judge give me a unique insight to the duties of this position and make me well qualified to sit as Circuit Court Judge. If I am fortunate to be elected, I will work diligently to make sure everyone who comes into the Courtroom is dealt with fairly, and that cases are resolved as quickly as possible.”