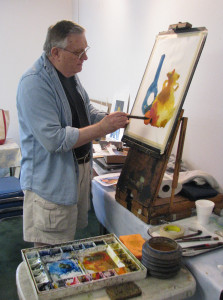 Demonstrating his “loose” technique on a still life and a barn landscape, he provided numerous painting tips along the way. He encouraged everyone to draw and plan more, using pencil drawings and value sketches as a foundation for good design in painting. He stated that he rarely spends more than an hour actually applying pigment to the paper, even on his award-winning works.

Stephens holds many awards, most recently he won an $800 award at the MidSouthern Watercolorists juried show, The painting will be on display until October 26 at the Butler Institute in downtown Little Rock. He is featured in several national watercolor magazines and publications, including the June 2013 issue of “Watercolor Artist”. He teaches workshops nationally and holds signature status in several organizations.