“The dwelling houses were set apart haphazard on the tough prairie sod; some of them looked as if they had been moved in overnight, and others as if they were straying off by themselves , headed straight for the open plain.” Willa Cather 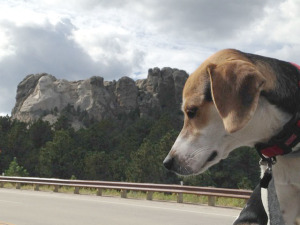 Willa Cather is Thom’s favorite writer. He loves the way she strings words together to paint an image in your brain. But the fact is, Willa wouldn’t recognize the plain now. As we have traveled up through eastern Kansas, Nebraska and South Dakota, the slate gray images she drew are long gone. No more “…gray prairie, under a gray sky.” The fields are fertile. The towns, if not all growing, are at least holding their own. And the farms. They are scrubbed and freshly painted a rainbow of colors. On many of them the barns and machine sheds are painted to match the house. Corn, alfalfa, wheat and oat prices have been high, and many farmers are profiting. That apparent prosperity makes my master smile. He tells me about how shabby and broken down many of the farms looked 20 to 30 years ago. As we turned west toward the Black Hills and rolled across the width of South Dakota, the smile remained. That rural revival made our arrival at the Shrine of Democracy all the more satisfying. Only an American, Gutzon Borglum, assisted by more Americans, could have turned a mountain into a monument; not only a monument, but, arguably, the greatest monument ever. On top of that, only nine miles down the road another mountain is being transformed. Sculptor Korczak Ziolkowski began carving the Crazy Horse Memorial in 1948. He died in 1982. His wife Ruth and seven of his children have carried the dream forward. Ruth died four months ago at the age of 87. Still the blasting and the carving continue on. The Crazy Horse Memorial will be taller than Washington Monument in D.C. and longer than two football fields, end zones included. It is a dynamic undertaking that will require years more work to be completed. In addition to honoring a great Sioux war chief, it gives the visitor an idea of what it must have been like when Borglum was turning granite into presidents’ heads at the Shrine of Democracy. Both sites should be on every American’s bucket list.