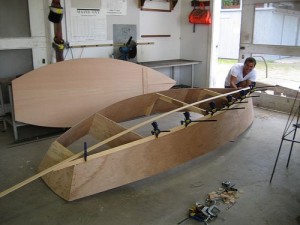 While I was in the service, I was stationed at Keesler AFB in Biloxi, Mississippi. I was looking for something to occupy my off time. I had dabbled a bit in photography; I also bought a bass guitar and tried to learn how to play it. There were all kinds of shops on base; Auto Shop, Wood Shop, Metal’s Shop, you get the picture. We spent a lot of time on the beach watching all the beautiful boats sailing by. Just up the coast was a Girls College with a long pier that extended out into the Gulf, on which it was rumored, the girls from the nearby girls college sunbathed in the nude. If we only had a boat, we could see for ourselves if this was indeed true.
One day while looking through a boating magazine, I decided to build a boat. I bought some plans and there were plenty of guys who wanted to help. I have never been one to start out small. The plans were for a 22’ cabin cruiser, but with a little math and some ingenuity, it became a 34 footer. There were seven of us working on the project, and it would be fun and educational at the same time. After several weeks, it was progressing nicely; we laid out the framework and then began sheeting it. We finished the hull in less than a month; fiber glassed and all. We found an old flathead V8 engine in the junk yard. I sent two of the guys over to the Auto Shop with the engine to rebuild it. The sergeant responsible for the Wood Shop told us one old engine wouldn’t be enough for a boat that size. I couldn’t find another, so I bought a new one from JC Witney.
With the help of everyone in the Wood Shop, one day we righted the hull, then, using the hoists, we set it on a cradle we had built. Another month and the engines were in, the deck was on and the control mechanisms were in place. All that was left was the cabin and the trim. In order to get some rest we were working in shifts, and by now, there were even more people wanting to help. One morning, I got up and decided we could do the rest on the water, and we needed to make sure she would float before I invested much more money. I sent some of the crew to Metal’s Shop to fabricate an old trailer from junk I had bought from the junk yard. Two days later we hoisted the hull onto the trailer, and we were off to the Gulf.
We had followed the plans well; she sat on the water just like the picture, without the cabin of course. It looked like a gigantic row boat sitting there. We must have looked like a bunch of Vikings, all sitting on the deck minus our ores, putting around the marina in a 34’ row boat. At one point, there were 15 of us in the hull at the same time. Enough play; it was time to get the cabin on. The cabin would contribute much of the strength to our boat, and it would have to be done before we could take her out beyond the protection of the break water.
Two days later, Hurricane Betsy hit the Gulf Coast, and our boat didn’t have a chance. We hadn’t even had a chance to name her and worst of all, we still didn’t know whether the rumors of the sunbathers were true. I really don’t know what happened to her, but I suppose she is still on the bottom of the Gulf somewhere.