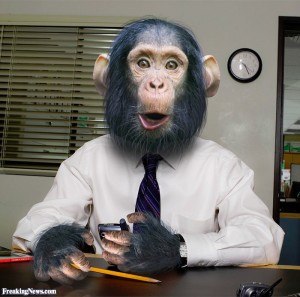 A carnival came to town for two weeks one summer. They blocked off 11th Street and three blocks became magic on a stick. Corn dogs, ice-cream bars, cotton candy—you name it—it was all there. As we walked the fairway looking at all the games of chance, we threw baseballs at lead milk bottles, threw dull darts at balloons that flopped in the light breeze and shot misaligned automatic BB guns at playing cards with big red stars on them. It was all kind of lame, and we were about to leave when John noticed a sign, “Pin The Chimp in 30 seconds and win $50.” John, Mike and I were all tall; John and Mike were big and tall. How tough could it be to pin a little monkey?
First of all, it wasn’t a monkey, and secondly, it wasn’t little. This Chimp was about 5 feet tall with 6-foot arms. John gave it first go. As John tried to sneak up on him, the Chimp turned and slapped John from 5 feet away. You could hear the slap from across the midway. The element of surprise was gone.
Over the next – what seemed like 10 minutes – that monkey slapped John silly. I told Mike, “OK, the trick is run in and grab him and throw him down.” John was 6’7” tall, Mike was 6”5” but what Mike lacked in height he made up for in girth. Mike got in the cage with the chimp, rushed at him, grabbed him around the waist, and they danced for the whole 30 seconds. You can’t tip over a Chimp if he doesn’t want to cooperate. While Mike and the Chimp were dancing, I was trying to come up with a plan. Stealth was not the answer, neither was brute force. That only left “Sack the Quarter-back.” When Mike came down out of the cage he smelled so bad we couldn’t stand next to him.
The three of us were on the Varsity football team in high school, and our nickname was “Spider and the Webs.” We were all linemen and had sacked many a quarter-back. If I could run in hit him around the ankles he would have to go down and I could just get on top of him. He came down all right. I had forgotten one thing. He had 4 legs; he was down for less than a second, then on top of me beating me like a drum.
That monkey was mad. John’s face was red as a tomato; I was black and blue and Mike and I both stunk to high heaven. We had come with John, and he would not let us back in his 1957 Ford. John had his dirty football jerseys in his trunk, so we all went to a motel up the street, told the manager what had happened and could we use one of his showers. He was a little reluctant at first, but when we told him we would sit on his couch while he thought about it, he changed his mind.
When Mom washed my clothes the next day she asked what I had fallen into. I never told her the truth; she wouldn’t have believed it anyway.