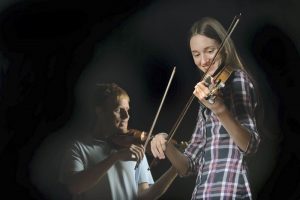 Two of the best fiddlers in Arkansas known as the Bow Tanglers will perform a free concert at 6 p.m. on Sunday, January 29 at the Fairfield Bay Baptist Church on Dave Creek Parkway.
This is the“back story” of Everett Elam and Emily Phillips:
This was going to be a special night for Everett Elam. He was set to perform during an open mic event at the University of Arkansas at Little Rock’s East Hall. Even more important: Elam was ready to impress a teenaged state fiddle champion he heard was in the audience.
Then Elam dropped his fiddle bow onstage. Then his newly fitted glass eye fell out. “Please do not let this girl see this,” he thought, as he frantically searched for the errant orb.
The fiddle champion, Emily Phillips, now a 19-year-old UALR student from Mountain View, didn’t observe that scene, but she had taken note of Elam. In fact, she wondered why he kept staring at her. She didn’t realize he was blind.
That fall 2014 night, the two UALR students began a relationship that went from mentorship, to friendship, to courtship. This year, their association led to a second consecutive Arkansas State Fiddle Championship in old-time music for Phillips and a second-place finish for Elam, a 27-year-old UALR student studying ethnomusicology and Spanish.
During the open mic night, one of Elam’s friends challenged Phillips to compete with Elam in a fiddle contest on stage. Phillips readily agreed, but Elam was a little hesitant, worried Phillips would “crush” him — “which she did, in some ways,” Elam recalled.
Elam consented to the competition, but he had a condition: He got to set the rules. Each fiddler would play one song to make the listeners dance, one to make them sad, and one to make them feel like they were in love.
After announcing his melancholy tune, “There is no night,” Elam joked, “It’s always night-time for me.” The joke set Phillips at ease. Before that evening, she had never met a blind musician, and she initially wasn’t sure how to interact with him.
In keeping with the light mood, Phillips started calling out the names of Elam’s songs as well as hers, impressing audience members and her fellow fiddler with her depth of knowledge.
“He was good, but he didn’t play old-time,” said Phillips, who is studying anthropology and Spanish at UALR. Old-time music just happens to be Phillips’ passion.
Audience members chose Elam as the winner — but he knew better. He quickly handed the victor’s flower to Phillips and delivered a message: “I have to have a lesson from you. I have to learn how to play from you.” Phillips was intrigued. She could tell Elam had talent, “and it was really cool to me that he was interested in old-time.”
Elam, originally from Benton, started playing the violin when he was 10, but he got off to a slow start. “I absolutely hated it,” he recalled. As a child, he attempted to tune the instrument and ending up breaking it. Although he stuck with the violin and eventually learned to love it, he often rebelled against the classic-method training he was receiving. He wanted to do his own thing.
Two years ago, he joined the Parlor Bears, a Little Rock-based band that performs everything from funk to classic rock. He also felt the urge, and the confidence, to compete in a fiddle contest. Elam planned to play, “Orange Blossom Special,” a popular and often-performed showpiece in the bluegrass and contemporary fiddle style. Elam and Phillips laugh about that plan now. A fiddler performing “Orange Blossom Special” in front of judges is a little like a guitarist expecting everyone to be dazzled when he steps into a guitar store and starts playing “Stairway to Heaven,” Elam said. The discerning audience has heard that tune before, and they’re not likely to be impressed.
Phillips could play “Orange Blossom Special,” but she won’t. Ever. It’s not that she doesn’t like contemporary and bluegrass music; she just prefers a different style. Phillips’ talent for traditional styles extends beyond the fiddle. In addition to winning back-to-back state fiddle titles, this year she also took first place in the open division of the Arkansas State Old-Time Banjo Championship.
One of the ways Phillips is preserving old-time music traditions is by giving lessons. She found a willing student in Elam. Even after the two started dating, he kept learning from Phillips. During the summer, Phillips was back home in Mountain View, and Elam stayed in Little Rock. He sent recordings; she critiqued them. The sessions sometimes got intense — they both are talented artists who take their craft seriously — but the progress was tangible.
Phillips strives to get things just right. She’ll spend hours listening to a song until she masters every note and nuance. She sometimes repeats the same tune for the entire 2.5-hour drive from her hometown to Little Rock.
She takes a similarly thorough approach with Elam. With Phillips’ help, Elam was ready to give one of the best performances of his life by the time he entered the August Arkansas State Fiddle Championship.