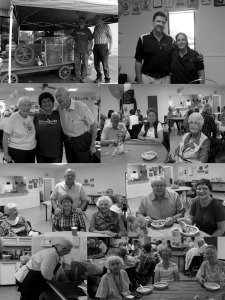 Friends and clients of Kevin Feeler, Financial Advisor with Edward Jones in Fairfield Bay, joined in celebrating Kevin’s 10 year anniversary with Edward Jones. This is the 27th annual “Sundaes on Saturday” ice cream social Edward Jones has sponsored in Fairfield Bay. Glen Dennis started the tradition in 1986. Branch Office Administrator, Sharon Snow, has served the Fairfield Bay community in her role as BOA for the past 27 years and says, the “The Sept. 20 social is the biggest and best since it first began. We used to see close to 200 in attendance, but it had dropped off in recent years,” said Snow. “The addition of the genuine, restored antique John Deere-powered, home made ice cream maker increased interest and attendance, Of course, opening it to the public increased attendance by about 20%, said Feeler. Feeler’s step-mother and father live in Sikeston, MO. Together they own and operate R.S.V.P. Catering Service. They recently bought the unique ice cream maker, which was most recently in service at the Cape Girardeau Fair, where they estimated they sold over 100 gallons of home made ice cream. Feeler would like to thank all of those who attended this year’s ice cream social and said he plans to have the antique John Deere ice cream maker back again next year.