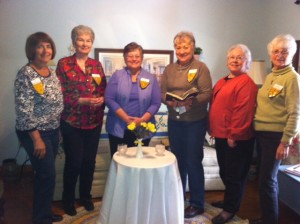 On March 5, 2014 XI Gamma Kappa met at the home of June Preston. Co-Hostess was Mary Berghorn. Maud Huber and Mary Berghorn received the Ritual of Jewels Degree, Betsy Slaughter receceived the Exemplar Degree and Nancy Mueller the Preceptor Degree after the formal meeting. The sorority will be going to Oaklawn on March 13, 2014 using the Fairfield Bay bus. We have a full bus; husbands were invited to join us. The 21st Year Style Show is scheduled for March 28, 1 p.m. at St. Francis of Assisi Parish Hall. Call Nancy Mueller at 884-6339 if you need a ticket.