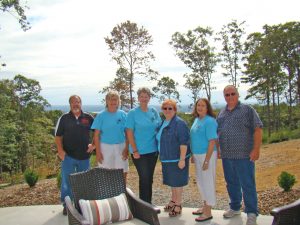 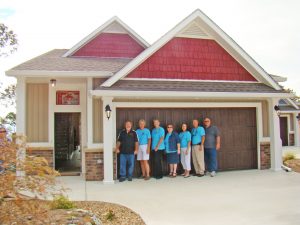 A soft opening was held at Unit #111 of the new Osage Point Townhomes in Fairfield Bay on Wednesday, September 13 from 10 and to noon. Here you see two views with the local realtors more than eager to answer any questions you may have.
Picture left to right at the lake view at the rear of the townhome is Mike Lester, Project Manager, Deb Ivanor, Remax Real Estate, Willena Herman, Goodwin and Herman Associates, Dale Tice, Tice Realty, Shirley Johnson, fairfield Bay Realty and Wayne Harlan, Project Manager.
Picture at the street view is the same group with Fred Herman, Goodwin & Herman Associates next to Wayne Harlan. The official Grand Opening is set for October 18, 2017 which is one year from the date of the ground breaking ceremony for Osage Point.