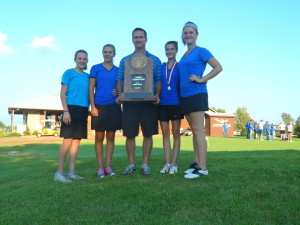 After a convincing win on September 23 in the Class A District 2 Conference Golf Tournament, The Shirley Lady Blue Devils went to Cooper’s Hawk Golf Course in Melbourne to face 11 other teams, including the reigning State Champions of Mt. Vernon, in the Class A State Golf tournament on October 1.

At the Conference tournament, the Shirley team was led by Senior, Kylie Phillips, with a tournament low score of 91, and Senior Nikki Owen, with a 2nd place score of 95. Freshmen, Mariana Larson and Makala Strang, are the other 2 team members. The team score is made up of the low three for each team and Shirley won the conference tournament by 48 strokes.

During the trip to Melbourne, for the practice round, the team discussed a previous year’s player, who was upset that she was playing in her final high school tournament, and how she had not played well. This year’s team wanted to be different; they wanted to do something that people would remember, and that is what they did.

At the State Tournament, things were difficult. After nine holes, the girls trailed the reigning state champions, Mt Vernon, by 11 strokes. On the back nine, Owen shot a tournament low of 43, and Phillips was next with a 44. That was the best nine-hole score of the season for each player.

The team anxiously awaited the third score. It was obvious that it was up to Larson since Strang had injured her hand in basketball practice and was in pain but determined to finish. With 3 holes left, Larson was in good shape. On her trip to #10, she asked Coach Ward if the other girls had finished, but he said he hadn’t seen the other girl’s scores. Ward already knew the scores, but felt it was better to not put any pressure on her. Larson had a good drive on # 10, but her second shot clipped a tree and put her in trouble. After #10, the score margin was extremely close. She managed to finish with a 6 and then a 4. Coach Ward texted her score to one of the parents at the club house to see how it would turn out. On the way to the club house he noticed that Owen and Phillips had their clubs on their backs and were headed to the driving range, which could only mean one thing– playoff!

The 2 teams that had won the previous 2 state tournaments were going to extra holes. The format: 2 players from each school were chosen and their combined score was put against the other school’s score until at the completion of a hole one score was better. The players drew numbers out of a hat to see the order of play. First up: Phillips. She bombed a drive down the right side of the fairway that rolled into the edge of the rough. Next up: Owen. She nailed her drive down the middle of the fairway. Those tee- shots put pressure on Mt. Vernon. Their first player hooked her tee shot into a cedar tree. Their next player drilled her shot down the middle. It took the Mt. Vernon player 3 shots to get out of trouble, leaving Shirley in the driver’s seat. Phillips played out about 50 yards short of the green, and Owen hit her 3 wood just short of the green. They knew all they had to do was play smart and it was over. Phillips and Owen each bogeyed for a total of 10 and Mt. Vernon got a 14. Shirley had won their second state title in 3 years.

These 2 seniors showed a lot of poise and confidence. They knew when they stepped on the tee box which team was going to win. With this State Championship, Phillips and Owen became the first 2 golfers from Shirley to win more than one state title. Owen was the runner-up medalist, for the 2nd lowest score overall, and Phillips was 3rd overall. Both will play in the Overall State Tournament on October 17 in Little Rock at the Pleasant Valley Country Club.

Next year will be a rebuilding year. With Larson (top-15 finish) and Strang, teamed with promising younger players, the future of the Shirley Golf Team looks very promising!