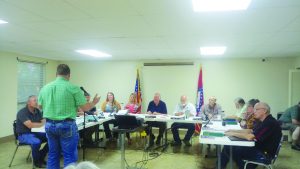 The Van Buren County Quorum Court held their regular meeting on Thursday, September 21 at the County Court House Annex.
Members approved the minutes and financials as presented. County Judge Hooper gave the County Road and Equipment report.
Sheriff Scott Bradley addressed the Court and thanked them for the 15 years of servive he has been honored to provide. He explained that effective September 30, 2017 he is resigning from his current position as Sheriff. He will take a position with the state as Director of the Arkansas Sheriff’s Association.
Bradley said he has served with many different courts throughout the years and enjoyed working with each one. He feels he is leaving the department in great shape with personnel and equipment.
Donna Branscum, with the County Health Department, gave a brief presentation of the health of the county. She stated that the biggest issue facing the residents is a rise in Type 2 Diabetes. The national populous average is 8.5% where Van Buren County is 13%. Judge Hooper said that the most important thing that can be done is communicate to the public the programs the county offers to help combat not only Diabetes but other health issues.
In other Court Business:
• Karen Bagley of Distrcit 9, shared concerns about the Medical Marijuana issue if Van Buren County is chosen to house a facility. Dale Holt explained that no county within the state can make any recomendations or decisions as to operational procedures. The Arkansas Medical Marijuana Commision sets all the rules and regulations.
•Resolution 2017-25 passed dedicating the new bridge on Highway 124 in Van Buren County the, ‘Wilbur D. Brock’ bridge. Mr Brock was a longtime resident and his family made the request.
•Resolution 2017-24 passed to hire two part time officer for the Van Buren County Detention Center.
•Resolution 2017-23 passed hiring two full time detention officers for the Van Buren County Detention Center.