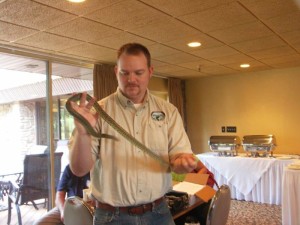 Among all the unusual presentations we listen to this week was Arkansas’ Game and Fish Commissions’ Jason Hooks and Kristen Bartlow’s talk about snakes. Of course most of us are cautious ( to say the least) around snakes. Most snakes are harmless creatures and useful in our gardens. Then there are the venomous types. In Arkansas we have them all: Copperheads, Rattle snakes Cottonmouth and even Texas Coral snakes. Snakes are among the least understood and yet one of the most intriguing of animals. Snakes lack fur, feathers or legs and are not warm blooded. Most people find it difficult to relate to them. So snakes have been feared and maligned for millennia. There are 2900 species found worldwide of which 140 species live in the United States. Here in Arkansas we have a modest number of only 36 species. Jason and Kristen brought one innocent snake to the luncheon talk. We all got to touch the snake. Jason pointed out to us that our snakes are not aggressive unless stepped upon or interfering somehow with their territory. Snakes are protected in our state, it is illegal to kill them unless we feel threatened.

Eleanor, my wife, killed a copperhead on our garden walk a few years ago. Occasionally some innocent garden snake gets caught in our protective garden fencing. If possible we try to free them.