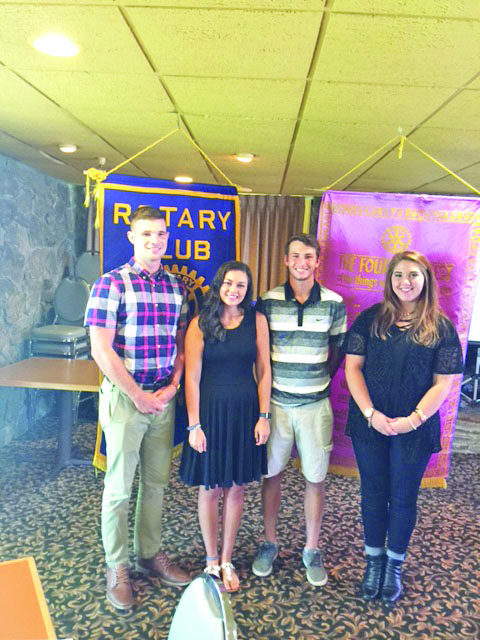 On July 26, 2017 Rotary Club of Fairfield Bay took pleasure in honoring four local high school students participating in an essay contest to describe their personal understanding of the “Rotary Four Way Test”. The test, a simple easily-memorized measuring stick of ethics was crafted in 1932 by a cookware company owner for his employees. It was adopted as one of Rotary’s guiding principles in 1943. Every Rotary Club is opened with this four sentence self-questioning creed and Rotarians are enjoined to always apply the questions, which consist of
Is it the Truth?
Is it Fair to all concerned?
Will it build Goodwill and Better Friendships?
Will it be Beneficial to all concerned?
Each of the students presented his/her essay as summarized below and they will receive monetary compensation in appreciation of their efforts.

Joseph Owen, son of Rose Owen of FFB is a 2017 Shirley High School graduate who plans to attend Arkansas Tech at Fayetteville in the fall. Joseph reported he now regularly screened his words in a way that ‘begins and ends with me asking myself if I believe what I’m saying.” He pointed out in this era of social media; information could be spread on many platforms and thereby altered within minutes, both accidentally and intentionally. Joseph also pointed out if an unflattering story were not true, it would not be fair to the person involved; spreading gossip also hurt friendships and it could not be beneficial to the person being unfairly depicted.

Savannah Henderson is an 11th grader at Clinton High School and the daughter of Lisa Henderson of Clinton; after graduation, she plans to attend college to become a physical therapist. Savannah described how she believed the Four Way Test could be known as the test of life. She felt the truth was most beneficial when its effects would hurt the person hearing it “because that is the time when the person needs to know they can trust what is being said.” This did not mean, of course, being harmful or degrading with your words, which would not be beneficial. Savannah felt the 4-way test was an amazing ‘rule of thumb’ for life’s test to “always tell the truth”, “always be kind” and “always show goodwill to those around you.” She believed every obstacle arising in life is a test of faith, good will, trust, kindness, forgiveness and friendship. It matters if you tell the truth, not just in situations when truth is beneficial but “even when the truth hurts.”

Jed Privitt, son of Tim and Darla Privitt, just graduated Shirley High School and is entering University of Arkansas/Fayetteville in the fall to study business law. He felt the 4-Way Test “will change how I decide what to say.” Business is about relationships and the 4-Way Test will affect his life by making him “a morally strong and capable person that can build healthy relationships.” The test is an “easy guideline that we should all demonstrate in our lives to make us better people.” Telling the truth and being honest with one another would help gain key relationships and bring trust between him and others. In regard to fairness, goal would be to come up with the best viable option for everybody involved. “This would “help me to be morally strong and genuine in all the relationships I encounter.” He stressed “To be concerned about the outcome of what I say, think and do upon others will help me tremendously.”

Marianna Larson is the daughter of Rocio Larson of FFB; she just graduated from SHS and reported in exactly 24 days, she would leave her home of 10 years and move to a town many hours away, attending college in Springfield, MO to major in political science with a minor in law and society. She found the Four Way Test to be the key to step into a new world and new experiences. Marianna pointed out the importance of truth and fairness, noting she was able to answer the “goodwill and friendship question” just a few days previously. At that time, she was stuck deciding if she wanted to join her college’s golf team. She eventually realized being on the team would not only help her build character but also friendships that would last a lifetime. It would not be easy but would pay off in the long run, so the third question helped her make a really big decision in her life. Marianna wants to be involved in government, stating “The one question I know that politicians should answer for themselves before instilling new policies should be: Will it be beneficial to all concerned.”

Bay Rotarians enjoyed the presentations and it is gratifying that even 85 years after its inception, the Four Way Test remains just as useful to our upcoming generations.