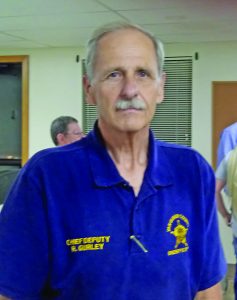 The Van Buren County Quorum Court held a special session on Thursday, September 28, 2017 to discuss the vacancy in the Van Buren County Sheriff’s office.
Two applicants were to be considered to fill the position of county Sheriff, the current Chief Deputy, Randy Gurley and Clinton Funeral Home business owner, Derriel Ezell. County Attorney Chad Brown and justice of the Peace 2, Dale James recused themselves from the vote for personal and professional reasons in regards to the two candidates.
Justice of the Peace 1, Dell Holt, read the Resolution to Declare and Fill the Vacant position of the Sheriff’s Office with the name of the appointed Sheriff omitted until the voting process is complete.
After the reading of the resolution, both candidates had three (3) minutes to address the court with a brief summation of why they should be considered for the position of Sheriff.
The court then went into executive session at about 7:30 p.m. to make a decision. Each candidate was asked additional questions during the session to help the court make their decision.
At about 9:45 p.m. the court concluded their executive session with a decision.
JP Holt, read the Resolution again, this time entering the name of Randy Gurley to fill the remaining term until December 31, 2018 with a vote of 5 Yes and 3 Nos.