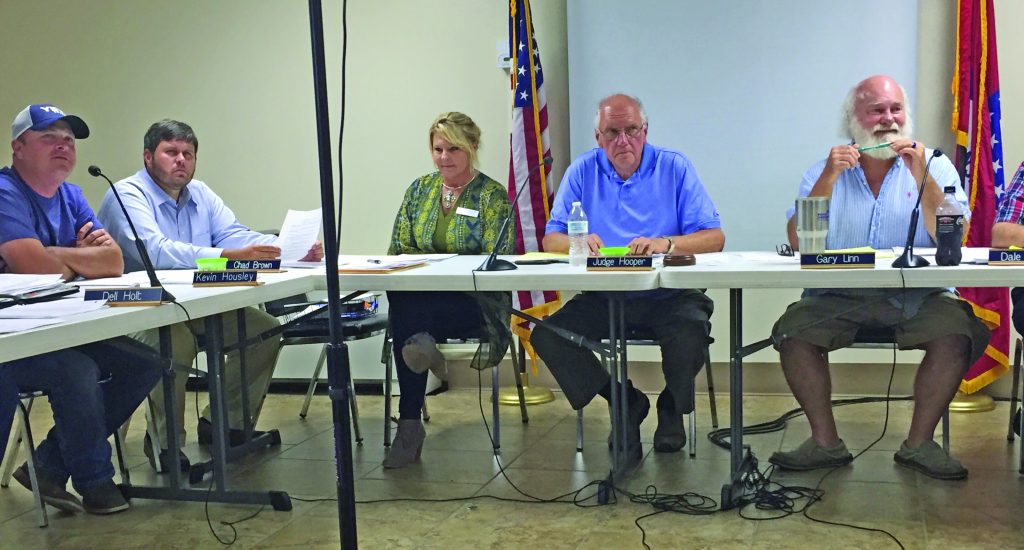 The Van Buren County Quorum Court met Thursday, August 17 for their regularly scheduled monthly meeting. Judge Hooper called the meeting to order with the Minutes, Treasurer’s Report and Appropriation Analysis read and approved.
“The Arkansas Medical Marijuana Amendment of 2016” brought Stephen Shrum with Arkansas Natural Products LLC and Joan Warren with Seven Hybrid Cultivation Cooperation to the meeting. They presented their plans for cultivation and dispensary for Medical Marijuana in Van Buren County. Van Buren County is a Tier 3 as stated by the Arkansas Economic Development Commission. Tier classification is based on poverty rate, population growth, per capita personal income and unemployment rates. Tier 1 counties are considered the most prosperous counties and Tier 4 counties are the least prosperous. Both companies would bring approximately 30-50 local jobs to Van Buren County. According to the Arkansas Medical Marijuana Amendment Commission, there will be 5 Cultivation and 32 dispensaries statewide, making Van Buren County a geographically desirable.
County Roads and Equipment—road improvements and repairs continue. 90,212 tons of Chip and Seal were applied to Hwy 9, Cutoff Road, Hickory Road, Buttercreek Road and Virginia Road. Approximately 6 miles of road were completed with 8 miles left. Only 43.5% of the budget has been spent thus far.
Sheriff’s Department—Bradley reports there were 27,000 calls for service in 2016 and 28,012 calls for service this year. A “call for service” is when a Police employee must respond to evaluate a reported event such as assault and battery, traffic violations, and drug-related events that lead to charges/documentation.
Lori Treat, with Animal Control – informed the court that there are 29 adult dogs, 10 puppies (under 6 months old), 18 puppies (10 weeks and under), 3 adult cats and 12 kittens, with 4 cats in foster. SYNP is participating in a fundraiser with Funds2orgs, which asks for gently used shoes to be brought to the SYNP shelter. And SNYP will receive .40 per pound for the donated shoes.
For new business:
•An Ordinance enacted by the Quorum Court of Van Buren County, Arkansas amending Ordinance No. 2017-24 to correct the fund and department numbers.
•An Appropriation Ordinance to amend the original Appropriation Ordinance #2016-52, the annual operating budget for 2017, to increase the projected revenue for County General and appropriate $651.30 into the Volunteer Fire Department Budget #1000-502-1010 Workman’s Comp and $400 into the Flood Plain Management Budget #1000-199-2001 General Supplies and $457.62 into the North Courthouse Annex Budget #1000-122-2024 Maintenance & Service From the Animal Control Budget #3407-400-3060 Utilities-Electric.
•An Emergency Ordinance No. 2017-27 to establish penalties and fees for certain Animal Control violations. Penalties and Fines as followed:

1.Any person who commits the offense of cruelty to animals shall be deemed guilty of a Class A misdemeanor and shall be subject to fines and penalties as prescribed in A.C.A. Section 5-4-401 (up to one year imprisonment and $1,000.00 fine).
2.The following animal control violations shall be misdemeanor offenses punishable by fines in the following amounts:
A.Illegally discarding a live animal “dumping” which shall include leaving animal(s) at the Animal Shelter after hours without express written permission $1,000
B.Owning an animal at large $50
C.Owning a vicious animal at large $500
D.All other offenses $25