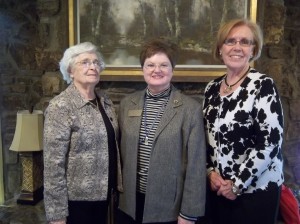 The two Fairfield Bay Questers chapters joined together to host State President Carol Moseley at a luncheon on Saturday, March 23, 2013 at the Indian Hills Country Club. Carol lives in Mablevale, but belongs to a Little Rock evening chapter and is employed at Baptist Hospital as an internal auditor. As State President, she tries to visit each Quester chapter during her time in office. She was accompanied by her mother, Carolyn, who recruited her daughter to Questers and at 82 years of age will be installed next month as the Questers State 2nd Vice President. Carol spoke about the joy of being a Quester, whose primary focus is the preservation and restoration of antiques and historical monuments. She reminded us of the excitement we felt as a new member and asked the important question, “Why have we remained a Quester for 10 or 20 or 30 years?” It gave us a chance to renew our passion for the projects we support in Fairfield Bay. The Davis Special School is supported by the Davis Special Chapter and the Indian Rock Chapter has recently committed to the Museum and Log Cabin. Beth Tucker gave a very interesting program entitled, “The Inkwell Is Drying Up,” referring to the possibility of electronic communication replacing the written word. She traced the creation and development of written communication, from symbols and pictures, to fancy cursive and the present day combination of printing and cursive. Seventeen Arkansas Quester chapter members are preparing to host the annual International Convention which will be in Rogers, Arkansas this year, May 3-5, 2013. The theme of the convention, which hosts members from all over the world, is “Arkansas: A Gem of a State.”