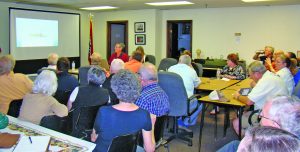 Prior to the regular meeting of the Fairfield bay City Council, the Public hearing for the Proposed Bond Package was held with a full house of concerned citizens.
Mayor Wellenberger presented the Citys case for wanting to issue the bond for $525K.
Fairfield Bay is on the verge of great growth and the need of a hotel is evident now more than ever. With the amount of recognition the Bay has been receiving through marketing efforts and political ties, private investors have taken a huge interest in developing a hotel in the Bay to fill the void.
Neither the City or the Club will have a financial interest in the hotel. Fairfield Bay will have covenants in the deed transfer of property for the exact footprint of the property the hotel sits on that defines its long term usage.
This is where the bond package of $525K comes into play. The city has committed to invest $500K outside of any ownership interest in the hotel for parking lots and other infrastructure.
The bond package pay back will be funded with the Franchise Fees paid to the City on a quarterly basis from local utilities. No taxes will be imposed on the citizens to pay back the bond.
Melissa Walsh, Municipal Advisor with Stephens Public Finance, said that 4 banks bid on financing the Franchise Fee Revenue Improvement Bonds and Regions came in the lowest. Walsh stated that having 4 bids is quite a statement of support.
During the City Council meeting after the public hearing, Mayor Wellenberger, read the 14 page Franchise Fee Revenue Improvement Bond Ordinance and the Council waived the rules of reading and passed the 2017-05 Ordinance. The Council also approved the 2017-12 Resolution for Bond Bid Acceptance and also approved a Resolution for the Land Purchase of the parking lots needed for municipal parking.
In other business:
• 2nd reading to Amend Municipal Code of Sign usage within the City limits.
• 2nd reading to Amend the Municipal Code for Fireworks within the City limits.
• Tactical Communications Officer, Eric Ekoff, gave a presentation of the trip to Texas to aid in recovery from Hurricane Harvey. 58 certified crew members of Emergency Management were involved.