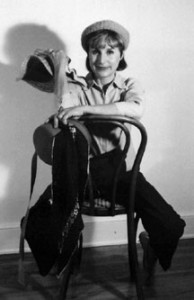 Pippa White turned to solo performing in 1994. Previously, she had an extensive career in theatre and television on the West Coast, including five years hosting a daily morning television show on ABC in San Francisco.

She calls her One’s Company Productions “part theatre, part storytelling, part history.” Audiences call them unique, captivating and touching. To date, she has crisscrossed the country many times touring to over twenty-five states, including California, New York, Connecticut, Colorado, Texas, Florida, Illinois, Washington and Alaska. She has performed at universities and colleges, conferences, performing arts centers, museums, libraries and festivals. Pippa has been featured at the Civic Center of Greater Des Moines, in their Applause Program, many times. Other venues and organizations include the Gallagher-Bluedorn Performing Arts Center, the University of Nebraska, Iowa State Center, the Connecticut Hospital Association, SUNY Orange, San Diego State University School of Nursing, Metropolitan State University-St. Paul, Miami Children’s Hospital, the Association for Career and Technical Education, Kansas City Young Audiences and several theatres and storytelling festivals. The Director of Special Projects at the Iowa Department of Cultural Affairs calls Pippa “the highest quality artist,” and the Kansas Storytelling Festival said her performance was “one of the high points in our festival history.” An audience member recently captured the gist of Pippa’s unique presentations when he said, “her performances are entertainment wrapped in history, intertwined with inspiration.”

Pippa has a BA in English from the University of Nebraska-Lincoln. In addition to performing, she offers workshops (Mining the Gold in the History Books: Finding Great Stories in HiStory) and residencies, and has been a teaching artist with Nebraska Arts Council since 1990. She has received several awards in recognition of her work, including two Individual Artist Fellowship awards from the Nebraska Arts Council.