Congessional Support For Coalition…Brian Henderson, VBC TEA Coalition Coordinator, attended CADCA’S National Leadership Forum in National Harbor, MD. While attending the Forum, CADCA dedicates a day for Coalitions to visit Capitol Hill and schedules meetings to meet with their state’s members of Congress to address the needs of their coalitions and encourage their continued support for funding of Drug Free Communities. Pictured is Brian Henderson with Senator John Boozman, receiving CADCA’S Appreciation of Support Award given to members of Congress who have shown support for Drug Prevention. 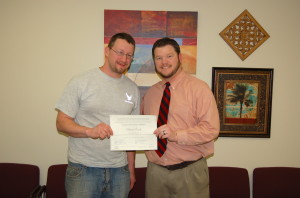 Hometown Hero Award…The Van Buren County TEA Coaltion recently started nominating people for the Hometown Hero Award. The purpose of the Hometown Hero Award is to recognize individuals within our community that work to improve Van Buren County through awareness of substance abuse or in some other way. The recipient of this award is nominated and voted on by members of the TEA Coalition. In January, Jane Evans was selected by TEA Coalition members as the first recipient of this award but has not yet been able to come receive the award. This month’s Hometown Hero, David Cook, is a member of the TEA Coalition. From David’s nomination form: “David has such a servant’s heart and he has been involved in many civic/charitable events. After becoming aware of our homeless situation in the county. David helped with the purchase and remodeling of an abandoned place in the community that will serve short term and long term housing needs. His hope is to start accepting residents in May of 2014. David has a strong desire and passion to help serve his community any way he can.” If you would like more information on the Hometown Hero Award, or may be interested in joining the TEA Coalition’s fight against substance abuse in Van Buren County, contact Brian Henderson at 501-745-7004 ext. 120.