The Annual STORYFEST, a part of Fairfield Bay’s OKTOBERFEST, will feature two noted award winning performers. They will be appearing at the Conference Center beginning at 9 a.m. on October 7 with each performing in the morning and again in the afternoon. 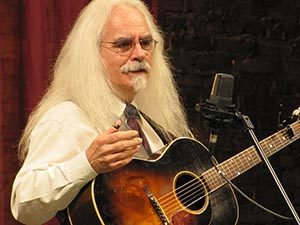 Michael Reno Harrell is an award winning songwriter, as well as a veteran storyteller and entertainer, and he’s from the South… the Southern Appalachian Mountains to hone it a bit finer. It was just natural that Michael Reno Harrell would become a storyteller, because it just comes so naturally to him. His style has been described as being “like a breakfast of butter and molasses on a warm biscuit… Southern, easy and sweet.”
Michael’s natural knack for storytelling, in print, song and spoken word has earned him praise from not only the music community but from the literary and storytelling worlds as well, having had the honor of being a Featured Teller at the National Storytelling Festival and to be Teller In Residence at the International Storytelling Center, as well as performing at major music events like MerleFest and the Walnut Valley Festival.
Michael’s recordings have for years received and continue to garner awards in Country, Americana and Folk circles. His humor and wit, as well as the emotional depth of his work, keep his fan base growing and staying tuned in for whatever comes next. Don’t miss the chance to experience what those faithful fans keep returning again and again to enjoy. 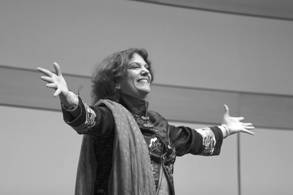 Laura Simms is an award-winning storyteller, recording artist, teacher, writer and humanitarian based in New York City.
Remarkable performances of traditional stories interwoven with personal narrative have earned Laura Simms worldwide recognition and honors since 1968. Laura has created a cutting-edge performance style that bridges ancient oral tradition, poetic narrative and performance art. Her storytelling is meaningful and uncannily entertaining.
She performs and speaks at theaters, festivals, schools, symposiums, corporate events, museums, conferences and special events throughout the world. She has appeared in festivals in Denmark, Singapore, India, Romania, United Kingdom, Poland, India, Norway, Republic of China, Austria and more.
Laura founded the Gaindeh Project, 1995 – 2006, an international initiative using storytelling, creativity, meditation and reconciliation for individuals and communities. In her role as director of Gaindeh Projects, Laura worked in Romania to teach storytelling skills to orphans and gypsy mothers.

Tickets for StoryFest are on sale at the Fairfield Bay Conference Center, 110 Lost Creek Parkway or by calling 501-884-4202. Advanced tickets are $10 in advance and $12 at the door.