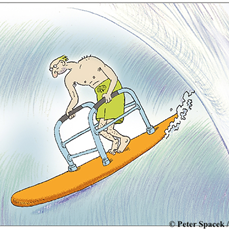 Things that I did not know but now I know:

ΤGod’s blessings for me depend on me forwarding a certain email to nine needy souls.

ΤAnything edible dropped on the floor if picked up within five seconds can be eaten without risk . . .

ΤThe weatherman is never wrong when he predicts that there is a 50% chance for rain.

Also on the table

ΤCharles Krauthammer is the most rational, thoughtful news analyst on the current scene. Also very good is Thomas Sowell . . .

ΤThe jury is still out on columnist Bradley Gitz. His libertarian slant works for me on most things governmental but it is very hard for me to swallow his hands-off thinking on social issues such as prostitution, gambling, drug use, etc . .

ΤThere is an inverse relationship between the number of TV commercials for auto insurance companies and the premiums they charge. Best deal around is Auto-Owners Insurance. Have you ever seen an ad for them? Not me.

ΤSpeaking of Auto Insurance TV ads, I can’t hack Progressive’s “Flo,” or All-State’s “Mayhem,” State Farm’s are patently stupid, and Farmers attempt at humor gag the proverbial maggot. But I do love the Geico gecko.

On the main platter

As a kid you were not spoiled by affluent parents- there was no money to throw around except for shoes once in a while. !Your parents worked long hours so you had to provide your own entertainment, usually with the other kids in your neighborhood. This worked to make a kid more self-reliant. !Since family money was tight, you learned to work for your own money, but more importantly you realized the value of hard work – a priceless gift. Kids took on jobs such newspaper delivery routes, shoveling snow, mowing lawns, cleaning basements, delivery boy for the butcher and/or the drugstore, selling magazines like the Saturday Evening Post door to door, caddying . . . whatever it took to make a buck. !Radio was great with “I Love a Mystery,” “Gangbusters,” “The Shadow,” and “Jack Armstrong” !. Movies and magazines were wholesome, nothing sleazy or immoral. “Necking” in the balcony was about as far as anything went. ! You were too young to get killed in WWII and too old for the Vietnam nightmare. !College was very affordable with good jobs waiting after graduation.!You benefitted from the paternalistic model of corporate America so prominent in the second half of the 20th Century: You got the big pension, the employee stock ownership plans, and the employer paid healthcare insurance. !In your retirement, you get the free health care via Medicare and the Prescription Benefit Plan.!You receive a generous monthly social security check which far exceeds the money you put onto the system.! The world is your oyster now with TV, iPads, iPhones, Netflix, email, and Google.

The generation born in the 1930’s caught a fabulous wave – a very singular wave, probably never to be experienced again. Enjoy!