Jackie Rohrer and Sharon Luxon started Our Towne Productions in 2012 when Stas of Stas Productions moved to Pennsylvania. Jackie and Sharon had been in many plays for Stas and they adopted his management style.
He also donated all of his sound equipment and a storage unit full of props, some of which dated back to the 70’s.

The fledgling production company put on its first play at the Racquet Club in 2012. The first play was The Odd Couple – The Female Version.
In 2013, the Conference Center was renovated and The Performing Arts Theater was created. Since then, all Our Towne Production plays have been performed in this venue. Some favorites include Hallelujah Girls, Arsenic and Old Lace, Steel Magnolias, Harvey, Calendar Girls,The Butler Did It, and Dashing Through the Snow.

Lighting, Sound, Set Design and Construction, Costumes, Set Changers and Publicists are all important functions for any theater production and Our Towne Productions has been blessed with some of the finest. Bonnie Hookman, Ernie Campbell, Linda Tangen, Greg Duggan and Joanne Hadley have worked on almost all of the productions.

In 2018, there are two productions planned. The Summer play will be Academia Nuts. This is a comedy starring Jackie Rohrer, David McBee, Sharon Luxon and Robert Otis. Play dates are June 23-24, and June 29-30. To kick off the holiday season, a musical, Nuncrackers, will be presented. The dates for Nuncrackers are November 3-4 and November 9-10. 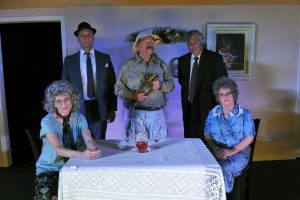 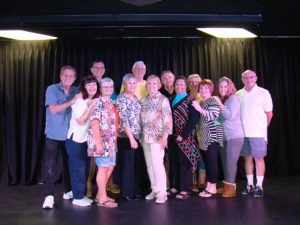 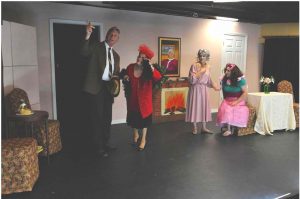 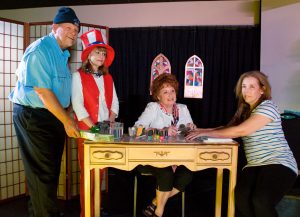