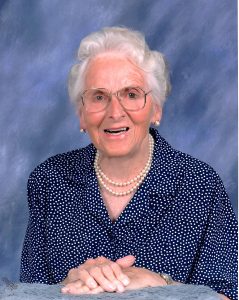 Sophie Rethis, 90, of Fairfield Bay, born on August 9, 1927 entered into the presence of her Lord Jesus Christ on July 9, 2018 after a very short stay at the Conway Regional Hospital unable to overcome the aftermath of a fall in her apartment at Indian Rock Village (IRV) in Fairfield Bay, Arkansas.

Sophie was a twenty-year resident at IRV, moving there in 1998 from the Chicago, Illinois area. During her years at IRV, Sophie distinguished herself as a true servant of her fellow residents and also of the staff of IRV. She was a member of the IRV Auxiliary and as an excellent seamstress, Sophie fastidiously repaired many a garment over the years. Her presence IRV was two-fold: walking the halls and the nearby paths of IRV as well as short visits with the residents in Health Care – always with a purpose of giving sweet but short greetings to all those she encountered on her way.

Sophie was extremely self-sufficient and very independent, accepting as little help as possible right up to the end. She was very reserved when it came to revealing her life’s story in the years before coming to IRV. What little is known about Sophie is that she grew up in the quaint Swiss village of St. Gallen, being the middle of three sisters. Some time in the early 1950’s, Sophie immigrated to the U.S. and became a Naturalized Citizen of the U.S. in 1956.

Sophie was known to have worked as a nanny and as a restaurant hostess. She also was the sole proprietor of an electrolysis business in the Chicago suburbs – all before moving to the Bay. In her early years at IRV, she was not shy when it came to instructing how a table should be properly set, and how the food should be elegantly presented. She eased off this pedal after a few years. Sophie will be remembered as having the heart of a servant and as a very gracious friend.

A brief internment service for Sophie is scheduled for 10:30 a.m. Thursday, August 23, 2018 at the Presbyterian Kirk of the Hills, Rev. Steve Frazier presiding. Her final arrangements were entrusted to Roller-McNutt Funeral Home in Clinton, Arkansas.