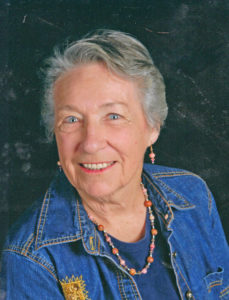 Patricia (Pat) C. Roberts, age 86, from Edgemont, Arkansas passed away on October 27, 2018 at Baptist Medical Center, Heber Springs, Arkansas. Pat was born in Poughkeepssie, New York on April 18, 1932 to Francis and Edith Owens.
She married Miles Roberts on June 8, 1952. She worked with Orange County, California and Fayetteville, North Carolina Social Service as a fraud inspector with the welfare department. In her golden years, she volunteered with the Coast Guard Auxiliary and rose to the rank of Commodore of the Coast Guard Auxiliary of the Eastern Seaboard while living in North Carolina. Pat was active in her sorority and was a member of St. Francis Catholic Church, Fairfield Bay, Arkansas. She was an avid outdoors enthusiast enjoying hunting, fishing, golf, traveling and working in the garden.
She is preceded in death by her husband Miles Roberts and daughter Lou Ann Malpass.
Pat is survived by children Miles A. Roberts (Michell) of North Carolina, Thomas Roberts of North Carolina, Patricia Morgan (William) of Texas, Robert Roberts (Pam) of Arkansas; her brothers Lawrence Owens (Judith) of Washington and Steven Owens (Diane) of Arizona; 14 grandchildren and numerous great-grandchildren.
Services will be at St. Francis of Assisi Church in Fairfield Bay on Saturday, December 1, 2018 at 10 a.m.
Arrangements have been entrusted to A Natural State Funeral Service, Jacksonville, Arkansas.
Her online guestbook is available at www.anaturalstatefuneralservice.com